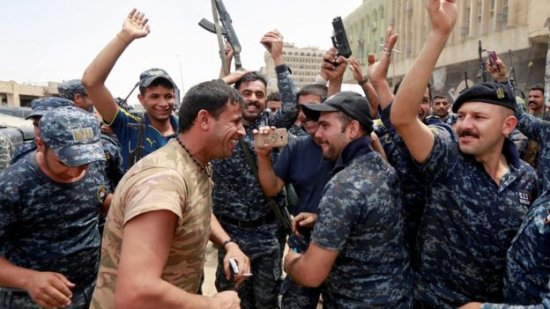 So-called Islamic State (IS) defences in the Iraqi city of Mosul are collapsing fast and troops expect to take full control in the next few hours, state television has announced.

Only a few metres remain to be taken, a correspondent said.

Some Iraqi security forces have been seen dancing in the streets even though commanders have nor confirmed the news.

The government announced the full “liberation” of eastern Mosul in January, but the west of the city has presented a more difficult challenge, with its narrow, winding streets.

The UN has warned that IS may be holding more than 100,000 people in the city as human shields.

Last October, the Iraqi army said there were 6,000 militants in the city. Fewer than 300 were thought to be holding out.

Some 900,000 people have been displaced from the city since 2014 – about half the the pre-war population- aid organisations say.

Last month, Iraqi Prime Minister Haider al-Abadi said the destruction of the ancient mosque in the city of Mosul was “an official declaration of defeat” by IS.

Iraqi forces say IS blew up the Great Mosque of al-Nuri and its famous leaning minaret as jihadists battled to stop advancing pro-government troops.