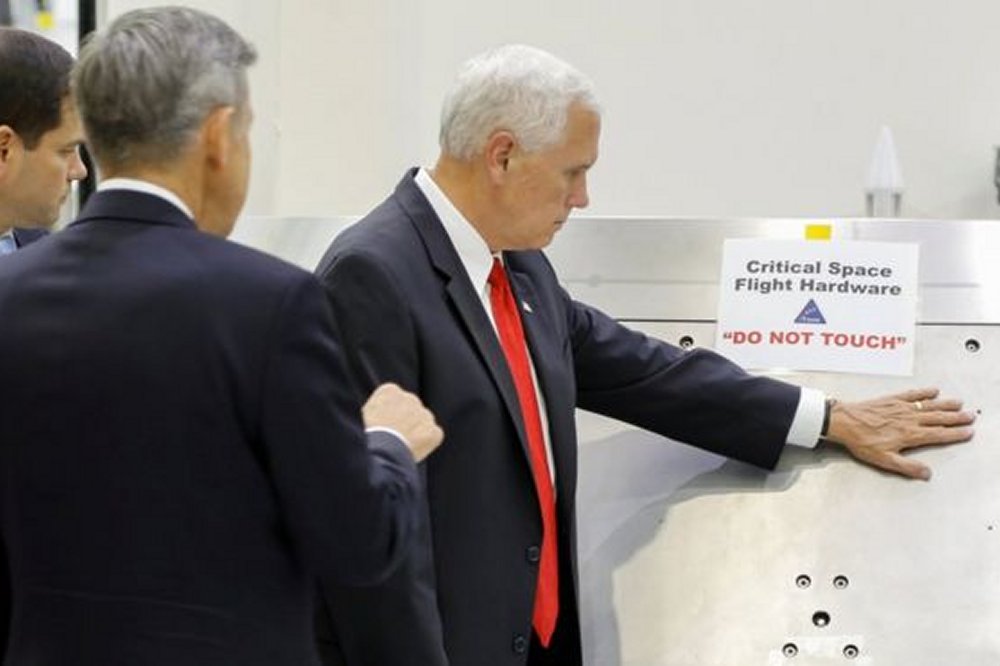 US Vice-President Mike Pence has made a tongue-in-cheek apology to Nasa after a photo of him touching a piece of space flight equipment went viral.

Mr Pence was visiting the Kennedy Space Center in Florida when he placed his hand on a piece of hardware – despite a large sign that read “do not touch”.

He later apologised to Nasa on Twitter, joking that Florida Senator Marco Rubio “dared” him to do it.

Nasa has assured Mr Pence the equipment was in need of a clean anyway.

The vice-president, who addressed Nasa staff at Cape Canaveral on Thursday, sparked a social media storm after a photo emerged of him touching a cover for the Orion spacecraft, which was labelled as a piece of “critical space flight hardware”.

On Friday, Mr Pence apologised to the space agency – while pointing the finger at his colleague.

Nasa replied that it was OK, and said in a statement that “procedures require the hardware to be cleaned before tiles are bonded to the spacecraft, so touching the surface is absolutely okay.”

If the hardware was not OK to touch, it “would have had a protective cover over it”, Nasa added.

Mr Pence later posted a further tweet mocking the incident, replacing the Nasa hardware in the photo with a porcupine.

The original photo had gone viral within hours – with some social media users criticising Mr Pence for ignoring the sign.

“Good to know our vice president has the self control of a sugar-charged third grader on a field trip,” wrote Twitter user @KentoTFH.

Others said those criticising Mr Pence were taking the matter far too seriously, and injected a little humour into their tweets.

“After six months at Trump’s side, Mike Pence quietly envies the capsule for its journey to the cold, tranquil emptiness of space,” wrote @KevinMKruse.

Twitter user @Michael_Bell_, in reference to the administration’s previous viral photo involving US President Donald Trump on a visit to Saudi Arabia, said: “Now, on to the orb of destiny!”