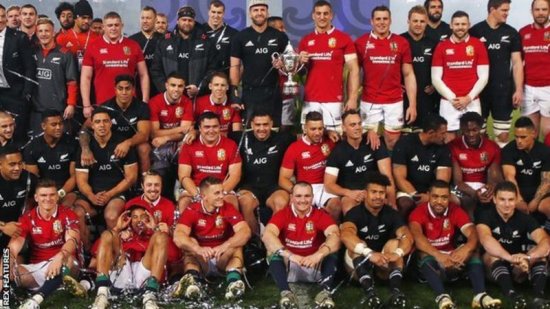 A long-range penalty three minutes from time from Owen Farrell snatched a draw for the Lions in an epic third Test and with it a share of the series.

The All Blacks had led 12-6 at half-time through tries from Ngani Laumape and Jordie Barrett, and had blown at least two other clear try-scoring opportunities.

But three penalties from Farrell and a monster from Elliot Daly from beyond halfway tied it up at 12-12 with 20 minutes to go.

With Jerome Kaino sin-binned and the red-shirted masses in the stadium roaring, there was a glorious chance for the Lions to make even more history and win a series in New Zealand for only the second time in 100 years.

Handling errors crept in as minutes ticked away, and when replacement prop Kyle Sinckler was penalised at a scrum on his own 22, Beauden Barrett kicked the penalty to make it 15-12, only for Farrell to hit back with a nerveless effort of his own.

And neither side could land the knock-out blow in a frantic final few moments, although New Zealand thought they might when referee Romain Poite controversially changed a home penalty decision in the tourists’ 22 to a scrum.

Before the series began, the All Blacks were clear favourites, and when they won the first Test at a canter the idea of a drawn series seemed a distant one.

To come back from there to share the spoils is a remarkable achievement, but there was a tangible sense of what might have been having come so close at the death.

Not since 1994 had the All Blacks lost at Eden Park, and not in 19 years had they lost consecutive Test matches at home.

That the Lions were within six points at the interval was mainly down to the unusual profligacy of the home side in a contest of breathless pace and intensity.

First Julian Savea dropped the ball on the left wing with his route to the try line open, and then the older Barrett brother Beauden spilled a short pass 10 metres out with the defence on its heels, before Laumape too knocked on with green space and the white line ahead of him.

But there was poise too from their least experienced men amongst the mayhem, 20-year-old Jordie Barrett tapping back his brother’s cross-kick to set up the opening try for Laumape – the pair of them both starting a Test for the first time – and then running on to Anton Lienert-Brown’s flat pass for the second try after Laumape’s brilliant off-load.

Beauden Barrett also missed a kickable penalty and conversion, the Lions staying in touch through Farrell’s boot even as the inside-centre was uncharacteristically off-key with his passing game.

Lions left with pride and regret

For all their obduracy, the Lions too will look back at chances not taken in a match left open for a hero to step forward.

When Kaino was yellow-carded for a forearm to the face of Alun Wyn Jones on 49 minutes and the score at 12-9, the thousands of Lions supporters in the ground sensed that this might be their team’s time.

But hard hands and anxious heads proved costly, a knock-on, forward pass and lost line-out all throwing away promising territory and momentum.

Even after Farrell’s late leveller there were slim chances, the All Blacks initially awarded a penalty by Poite from the re-start when replacement hooker Ken Owens caught the ball in an offside position after Liam Williams had got hands to it in the air.

But the French official then reviewed it and called it instead as an accidental offside, and from the subsequent scrum the Lions then almost broke away themselves.

When the final whistle went there was almost a surreal atmosphere in the ground, a sense of anti-climax that was soon washed away by the realisation that this had been one of the great Lions matches.