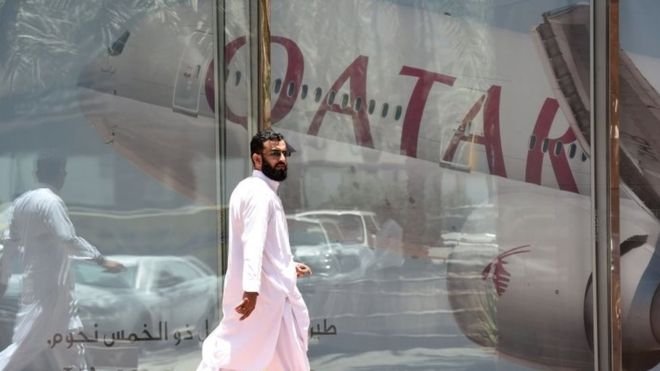 The four Arab states leading a boycott against Qatar have condemned its rejection of their demands and warned of unspecified new measures against it.

Saudi Arabia, Bahrain, Egypt and the United Arab Emirates said Doha was intent on continuing a “policy aimed at destabilising security in the region”.

New measures would be enacted in an “appropriate and timely manner”.

They cut links with Qatar in June over its alleged support of terrorism and ties with Iran. It denies wrongdoing.

The oil- and gas-rich nation was presented with a list of demands, including shutting down the Al Jazeera news network, closing a Turkish military base, cutting ties with the Muslim Brotherhood, and downgrading relations with Tehran.

Qatar vigorously denied supporting terrorism, and insisted it would not agree to any measures that threatened its sovereignty or violated international law.

The air, sea and land restrictions have caused turmoil in the country, which is dependent on imports to meet the basic needs of its population of 2.7 million.

In a joint statement issued late on Thursday, the four countries expressed their “deep surprise over the unjustified refusal by the Qatari government to the legitimate list and logical demands” aimed at fighting terrorism, combating extremism and safeguarding Arab and international security.

They stressed that the list of demands was now “null and void” and vowed to take further “political, economic and legal measures” in a manner that “preserves their rights, security and stability towards a hostile Qatari government policy”.

They did not specify what the measures might include, although officials have suggested financial restrictions could be placed on flows of Qatari money or that third parties could be forced to choose between doing business with the four or with Qatar.

On Wednesday, Qatar’s foreign minister accused them of imposing “a siege that is a clear aggression and an insult” and said the accusations were “clearly designed to create anti-Qatar sentiment in the West”.

“The answer to our disagreement is not blockades and ultimatums, it is dialogue and reason,” Sheikh Mohammed bin Abdul Rahman Al Thani added.

He also noted that Qatar was prepared to pay inflated prices for food supplies to be shipped in by sea or air from Turkey and Iran “indefinitely”.

The US, which has a major airbase in Qatar that is crucial for the campaign against so-called Islamic State, has called for the dispute to be resolved.

“We’ve become increasingly concerned that that dispute is at an impasse at this point. We believe that this could potentially drag on for weeks. It could drag on for months. It could possibly even intensify,” a state department spokeswoman said.

Secretary of State Rex Tillerson is expected to travel on Monday to Kuwait, which is acting as a mediator.