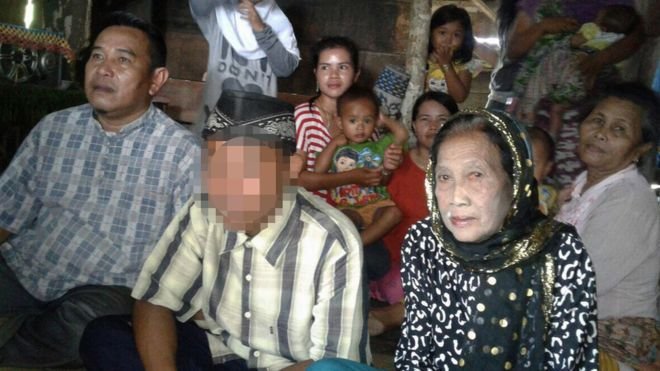 A teenager in Indonesia has married a woman in her 70s, in breach of both custom and the law.

The case came to light when a video of the wedding was circulated online.

The 16-year-old groom is technically still underage but village officials permitted an “unregistered marriage” after the pair reportedly threatened to commit suicide.

Under Indonesian law, women must be at least 16 and men at least 19 to get married.

Local media say the two grew close when the woman took care of the boy while he was suffering from a bout of Malaria.

Cik Ani, chief of their village in South Sumatra, told the AFP news agency that “since the boy is underage, we have decided to carry out the marriage privately”.

He also said the wedding on 2 July was to “avoid the sin of adultery” between the boy, named Selamat, and his spouse, Rohaya, who is thought to be between 71 and 75.

The boy’s father reportedly died several years ago and his mother has since remarried.

It is Rohaya’s third marriage and she has several children from her two previous husbands, reports say.

Yenni Izzi, an activist from the Women Crisis Centre in Palembang who campaigns to end child marriage, told the BBC the wedding was “a very uncommon case”.

“The boy decided to get married not for economic or physical reasons but because she gives him attention and love,” he explained.

Regional officials have expressed concern about the case, but it is unclear whether they will take action against it.

Indonesia’s Social Affairs Minister Khofifah Indar Parawansa was quoted in the Jakarta Post saying that it was “impossible for them to marry in a religious affairs office because the groom is still underage”.

South Sumatra Governor Alex Noerdin told the Sriwijaya Post that “it is beyond normal. It is a large age gap.

“In many cases it is the girls who get married off too soon. But about this wedding, between a young man and an elderly woman, I can not comment any further.”