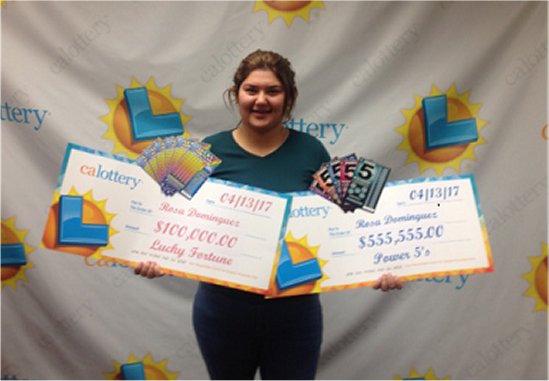 A 19-year-old California woman is $655,555 richer after winning two lottery jackpots in less than one week.

The California Lottery said Rosa Dominguez was driving home from Arizona when she stopped at an Eagle Energy gas station in Paso Robles and purchased some Scratchers, including a $5 Power 5’s ticket that turned out to be a winner for the top prize: $555,555.

“I was so nervous I just wanted to cry,” Dominguez told lottery officials.

Days later, Dominguez was at a Valero gas station in Greenfield when she decided to try her luck again with a $5 Lucky Fortune ticket, which also turned out to be a top prize winner with a $100,000 jackpot.

Dominguez said she plans to use some of her winnings to go shopping and buy a new car.