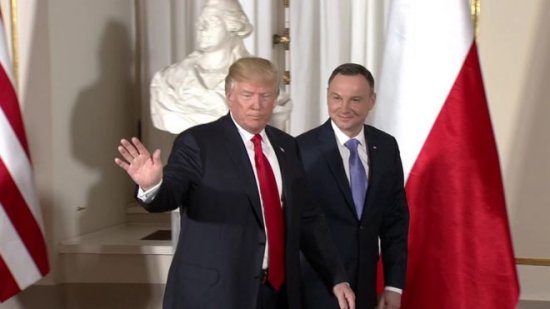 US President Donald Trump is to argue that the future of Western civilisation is at stake in a keynote speech in the Polish capital Warsaw.

Holding up Poland as an example of a country ready to defend civilisation, he will warn against the threats of “terrorism and extremism”.

Mr Trump is in Poland ahead of a G20 summit in Hamburg, Germany.

“Because as the Polish experience reminds us – the defence of the West ultimately rests not only on means but also on the will of its people to prevail,” Mr Trump will say, according to excerpts released from the speech.

“The fundamental question of our time is whether the West has the will to survive.”

Security in Hamburg has been tightened, with 10,000 people expected to gather for protests during the day and police warning of potentially violent clashes. They have already confiscated a number of homemade weapons.

Related Topics:Donald TrumpEuropeWarsaw
Up Next