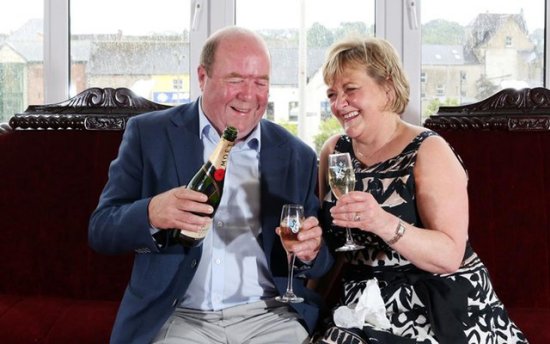 An Irish couple who started a charity to repatriate the bodies of Irish people who died suddenly or tragically while overseas have become the lucky lottery winners of over $1 million.

Colin and Eithne Bell, from Newry in Co. Down, started the Kevin Bell Repatriation Trust in 2013 following the death of their 26-year-old son Kevin in a hit-and-run in New York. The Bell family began fundraising to make up the enormous expense of bringing Kevin home to be buried and continued their fundraising since to alleviate the financial burden on other grieving families who are forced to go through the same process.

While the Aisling Irish Center in New York helped to bring Kevin home to be buried, other families were previously left to spend thousands on repatriation with little or no help. The Bell Family Trust has since helped over 300 Irish families to cover the cost when their loved one dies overseas in sudden or tragic circumstances. The families they have helped include those of the victims of the Berkeley balcony collapse tragedy in 2015 and the family of Danielle McLaughlin, the Donegal woman who was murdered in India earlier this year.

Former school teacher Colin, 64, and retired nursery school worker Eithne, 61, have now been rewarded for their good deed in a massive windfall from the EuroMillions UK Millionaire Maker, winning $1.3 million on June 20.