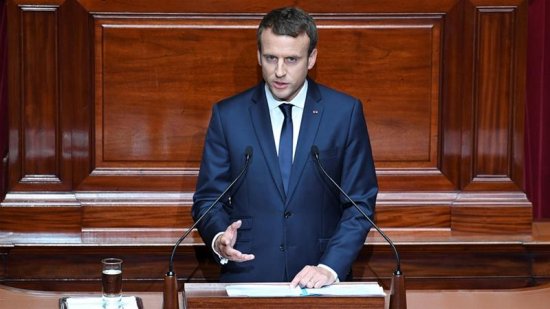 French President Emmanuel Macron has vowed to lift a state of emergency that has been in place since 2015 but also to harden permanent security measures to fight violent threats against his country.

Laying out his agenda at a joint session of parliament, Macron said on Monday that his government “will work to prevent any new attack, and we will work to fight (threats) without pity, without regrets, without weakness.”

Macron said the lifting of the state of emergency would be done towards the end of 2017.

At the same time, he insisted on the need to “guarantee full respect for individual liberties”, amid concerns that new measures would allow police too many powers.

Macron also vowed to maintain France’s military presence abroad, especially in Africa’s Sahel region and in Iraq and Syria, while highlighting the importance of dialogue and negotiations for long-term solutions.

The president’s 1.5-hour-long speech was his first major address since his inauguration in mid-May when he promised a French “renaissance”.

In his bid to strengthen the European Union following Britain’s vote to leave, he announced Europe-wide public conferences later this year in an effort to reinvigorate the bloc.

He said he understood why many Europeans see the EU as bureaucratic, distant and uncaring.

“I firmly believe in Europe, but I don’t find this scepticism unjustified,” he said.

He added that European countries should work more closely to help political refugees while fighting human smuggling and strengthening borders against illegal migration.

Macron has also pledged to fulfil his campaign promise to bring about deep changes in France, notably through labour reform and a series of measures to put more transparency and ethics into politics.

He said French voters no longer accept the conflicts of interest and corruption scandals that “used to seem almost normal” in the country’s political landscape.

Macron notably vowed to end the special court, mostly composed of legislators, that judges government members for crimes committed while in charge. They will be judged by regular judges, with a procedure to deter politicians from using courts to attack rivals.

Macron also said he wants to speed up the process of passing laws to better adapt the process to a rapidly changing society.

He proposed that some “simple” bills be voted on in parliament’s commissions instead of in plenary sessions.

Macron also wants to reduce the number of seats in parliament, which now stand at 925, by one third.

He promised to gather both houses of parliament in Versailles every year to be held accountable.

“The reforms and deep changes I have promised will be implemented,” he said.

“It is the first time that a French president has convened a joint session of parliament, here at the palace of Versailles, in order to to put forward what he called a roadmap for his five-year presidency,” she said.

Critics who fear Macron is trying to amass too much power organised protests over Monday’s event.

Legislators from the far-left party of Jean-Luc Melenchon as well as communists decided not to attend the speech in protest against what they call a “presidential monarchy”.

Far-right leader Marine Le Pen, who Macron defeated in the presidential runoff vote, said the country is “none the wiser coming out than we were going in”.

“He speaks of a dose of proportional representation, but we don’t know if he’s talking about a small dose or a big dose.”

Opposition legislators from three parties, including far-left France Unbowed, boycotted Macron’s address, and about 100 communists wearing the red caps of the French revolutionaries of 1789 demonstrated in front of Versailles’ town hall.

“Mr Macron is a challenge to democracy,” said Nicole Coulbaut, a 65-year old retired teacher and communist activist. “For him, it’s not parliament or the people who govern, but himself, Jupiter.”