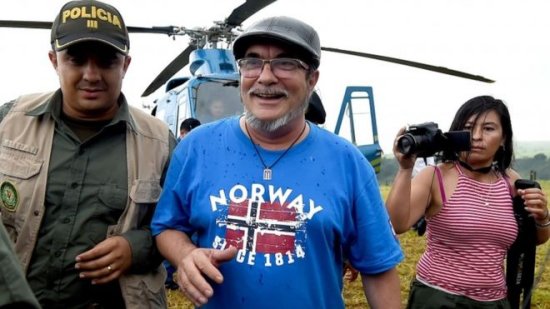 The leader of Colombia’s Farc rebel group, Rodrigo Londoño, is being treated in hospital for a stroke.

Mr Londoño, who is known as Timochenko, is expected to leave hospital on Tuesday and make a full recovery, doctors who are treating him said.

He was admitted to hospital in the city of Villavicencio on Sunday morning.

His health is “in a stable and satisfactory condition,” doctors said in a press conference. Timochenko is thought to be in his late fifties.

The Farc initially denied reports that he was ill.

But one of its leaders, Felix Antonio Muñoz Lascarro, known as Pastor Alape, later spoke to journalists at the hospital in Villavicencio.

Timochenko will not be transferred to another hospital, he said, adding: “This clinic provides the necessary conditions to treat him.”

Timochenko suffered a heart attack two years ago when he was in Cuba negotiating a peace deal with Colombian officials.

The left-wing rebels signed a historic peace accord in November after four years of negotiations.

They agreed to hand over their weapons after more than five decades and are now allowed to set up a political party.

Colombia’s President Juan Manuel Santos was awarded last year’s Nobel Peace Prize for his efforts to put an end to the conflict.

The Farc concluded its disarmament process last month, handing over its 7,000 registered weapons to the United Nations mission in Colombia.

Timochenko became commander of the left-wing rebel group in 2011, when its then leader, known as Alfonso Cano, was killed by the Colombian armed forces.

In an interview with El Espectador newspaper published on Sunday, he said he was “not nostalgic” of his days as a guerrilla in the jungle.

“I honestly feel a great relief for having concluded this stage and preparing for the next phase,” he said.

“For me, as revolutionary, the weapons were simply a tool that were with us for many years.

“But at the Farc we are not in love with guns. We love our cause and our ideals. And if we can carry on with our ideals without the guns, so much the better,” he told El Espectador.

Brazil arrests drug kingpin after 30 years on the run