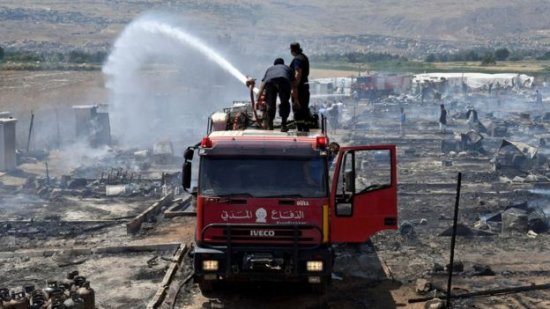 At least one person has died and a number of people wounded after a huge fire broke out at a camp for Syrian refugees in eastern Lebanon.

The blaze took hold at the camp near Qab Elias town in the Bekaa Valley. Footage from the scene showed near total devastation.

Lebanon has one million registered Syrian refugees, but believes the number is more like 1.5 million.

Many Syrians, displaced by more than six years of fighting in their own country, live in makeshift camps dotted around Lebanon.

The UNHCR’s Dana Sleiman said it is thought the fire was caused by a cooking stove, but added “we are waiting to confirm it”.

The Lebanese Red Cross told the AFP news agency that 700 refugees were evacuated from the camp as the flames took hold.

Residents from surrounding villages joined firefighters in the effort to put out the flames.

One man, Zafer al-Nakhlawi, said there had been 93 tents on the site, and only three remained standing.

Earlier reports put the death toll from the fire at three and gave a far higher number for the tents destroyed.

The Red Cross said six people were wounded; Ms Sleiman said two of them were in a critical condition.