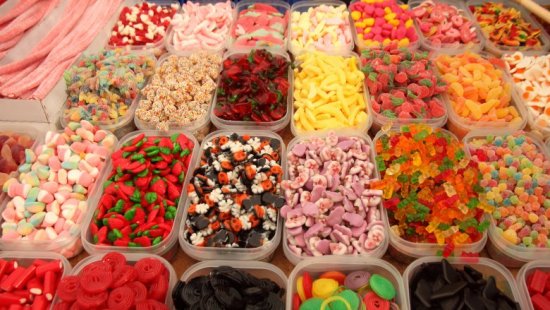 You would be hard-pressed to find someone who hates candy. With so many different types of treats, there’s something for everyone. Not only is there a lot of candy out there, there’s a lot of false information out there, too. You’ve probably fallen prey to some of these “facts” about candy that are actually complete myths. How many of these false facts about candy have you believed?

Every kid knows they should never, ever, ever swallow their chewing gum, right? Its rubbery texture has been rumored to take years to digest if you swallow it and can supposedly wreak havoc on your digestive system.

It turns out that this “fact” is just playground lore. While the composition of chewing gum does make it difficult to break down (which is why it doesn’t disintegrate in your mouth), it doesn’t actually linger around in your body if you swallow it. Instead, it gets pushed out with the rest of your body’s waste, just as any other foreign object would.

Chocolate will give you acne

It’s likely that your parents used the threat of an acne-scarred face to warn you off of eating too much chocolate. While that threat may have done the trick, it turns out that you didn’t really have to swear off all of those Hershey’s bars.

Dr. Ava Shamban, a board-certified dermatologist, told The Huffington Post, “chocolate per se will not make you break out” and that “there is little evidence that chocolate or any specific fatty foods will cause acne.” While it’s true that a diet high in sugar and fat can contribute to acne breakouts, there is no evidence that eating chocolate will cause a zit to sprout on your face.

A lot of parents refrain from giving their kids too much candy, convinced it will make them hyper and out-of-control. It turns out, however, there is no truth to the idea that sugar causes hyperactivity in kids. One study published in The New England Journal of Medicine found that “most controlled studies have not found consistent adverse effects” when sugar or aspartame was given to children. The next time your kid asks for a piece of candy before bedtime, you won’t be able to argue that it will keep them awake!

Another common myth about candy is that eating it will quite literally rot your teeth. While the consumption of sweets can contribute to cavities, the real culprit is the bacteria in your mouth which produces acid as it breaks down the candy. The acid harms the enamel of your teeth which leads to cavities.

This acid isn’t just produced when you eat candy, though. Any carbohydrates or starches consumed will lead to the same acid production. If you’re plagued with toothaches, your pain isn’t necessarily caused by eating too much candy, but is more likely because you’re not brushing your teeth afterwards. Eating candy probably won’t damage your oral health, as long as you’re brushing and flossing.

Gum is bad for your teeth

Many people shy away from regularly chewing gum as it is thought that too much chewing can wear away at your teeth. This fear seems logical, as chewing gum might result in more wear and tear on your teeth. However, the Oral Health Foundation says that chewing sugar-free gum can actually help prevent tooth erosion.

Chewing gum helps create more saliva in the mouth, which helps replace minerals lost when acidic foods and drinks wear away at tooth enamel. If you chew gum after eating, it can bring the acid levels in your mouth back to the “safe zone.”

Mentos and Coke can kill you

An urban legend that has seen some circulation on the internet warns of the dangers of eating Mentos and then drinking Coke. According to rumors, the combination of the fizzy soda with the mint can lead to a buildup of foam that might even result in death.

Snopes debunked this myth. While dropping Mentos into a bottle of Coke will cause the soda to create pressure and bubble up into a geyser that surges up to 20 feet into the air, the same effect will not occur if you consume the Coke and Mentos yourself.

That doesn’t mean, however, that “chasing down a handful of Mentos with as much pop as can be gulped” is a good idea. Snopes reported that those who have attempted this say “the intensity of the reaction forces the mouth open, thereby releasing most of the gas and foam into the wild, as it were, rather than keeping them contained within the person.” While it’s not a lethal combination, it’s far from pleasant and shouldn’t be attempted at home.

There’s some good news for people who are trying to lower their cholesterol. While people with high cholesterol typically avoid eating too much chocolate, some studies show there’s a possibility that eating chocolate may actually lower it.

While doctors still aren’t recommending that you incorporate the sweet into your diet to lower your cholesterol, small amounts of dark chocolate are good for your heart. You still shouldn’t overindulge, but a cup of hot cocoa might prove to be beneficial.

The dangers of Pop Rocks were so widely believed that there have actually been campaigns to make the candy illegal. The candy begins to fizzle and pop when it comes into contact with the saliva in your mouth, leading to an urban legend that eating them and drinking Coke can cause your stomach to explode.

At the height of the rumors, General Foods, the maker of Pop Rocks, had to launch a media campaign to defend the candy from attacks. Pop Rocks are totally safe (and fun!) to eat.

As with most foods, candy is not bad for you so long as it is consumed in moderation. While too much candy can result in weight gain and increased risks of certain illnesses, small amounts of some candies, such as chocolate, can be good for your health.

Samira Kawash, a self-proclaimed “candy professor” who is a professor emerita at Rutgers University, is the author of Candy: A Century of Panic and Pleasure. In an interview with The Globe and Mail, Kawash said that many of the concerns about eating candy are unnecessary. “When you’ve filled your diet with real food, having a little bit of candy is not really going to be too harmful,” she said.