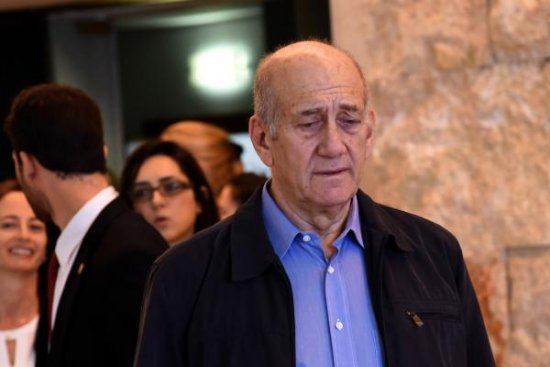 Olmert, 71, served 16 months of his 27-month corruption sentence at a prison near Tel Aviv.

Olmert became prime minister in 2006, when a stroke incapacitated Ariel Sharon, but resigned in 2009 when police recommended charges against him for accepting $161,000 in bribes for promotion of a real estate project as mayor of Jerusalem. He was also convicted in separate trials last year of fraud, breach of trust and obstructing justice when serving as trade minister. He was acquitted of other charges.

Olmert’s bribery sentence was reduced from six years to 18 months.

Under terms of his release granted by Israel Prison Service parole Thursday, he most do volunteer work.

The board said the crimes were “severe,” but he was “punished for his deeds and paid a heavy price.”

“The inmate underwent a significant rehabilitation process in prison and displays motivation to continue it,” it added. “All this significantly diminishes the risk he will deviate again from honest practice.”

Despite his early release, he is being investigated by the state attorney’s office over suspicions he smuggled out of prison a chapter of a book he is writing.

Olmert has lost 15 pounds in recent weeks, his associates told The Jerusalem Post.

He was hospitalized June 20 after complaining of chest pains but returned to prison last Tuesday.