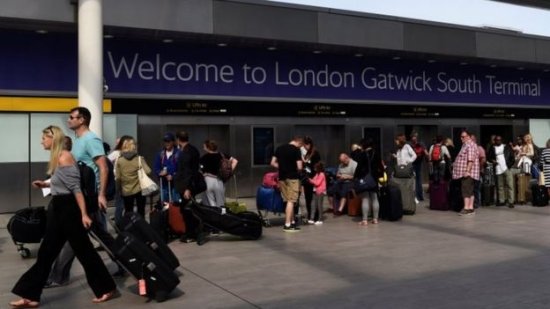 A drone flying close to Gatwick airport has led to the closure of the runway and forced at least two flights to be diverted.

A spokesman for the airport said the runway was closed for two short periods of nine minutes and five minutes on Sunday evening.

Gatwick said one plane had been sent to Stansted, whilst British Airways said another had gone to Bournemouth.

Sussex Police are investigating the incident.

Other flights had to circle above the airport as a precaution.

A statement from the airport said: “Due to reports of a drone observation in the vicinity of the airfield, runway operations at Gatwick were suspended between 18:10 BST and 1819, and again from 1836 to 1841, resulting in a small number of go-arounds and diverts.

“Operations have resumed and the police continue to investigate.”

Passengers have told the BBC they were diverted mid-flight.

Craig Jenkins was flying back with EasyJet from Naples in Italy when his flight was diverted.

“We were crossing over the Channel and it started circling,” he said. “It did four or five circles, heading further east, before the captain said we were landing at Stansted.

“First, they said Gatwick was closed because of an incident. Then, shortly after, they said it was a drone.”

Mr Jenkins, who is from Greenwich, London, said passengers were being given the choice of getting off or waiting an hour and flying back to Gatwick.

“If one person gets off here, all the bags need to get off,” he added. “There are lots of babies on this flight. I feel for the parents.”

Niamh Slatter, from Sussex, was flying home from Valencia, Spain, when her BA flight was diverted to Bournemouth.

“We were due to land 15 minutes early, but ended up circling over the south coast for a while,” she said. “The crew were brilliant and explained that we were being held due to a drone in the airspace at Gatwick but that they would tell us when they had more information.

“Our attempted landing at Gatwick was aborted quite late as the drone had been spotted again, so we were told that the flight was being diverted to Bournemouth airport.

“The crew aboard the plane have been brilliant, as have the staff at Bournemouth, on standby ready for us and other planes that would be landing.”

Former senior air traffic controller Doug Maclean told BBC News he was not surprised by the incident due to the growth in drone use.

“The aviation authorities really had no choice but to act on the safe side and suspend operations until they could find out what was happening,” he said.

“Drones are really very small. They are not designed to be spotted on air traffic radar. Airports like Gatwick and Heathrow are very busy places, so there are lots of people aware of what a drone looks like.

“As soon as anyone sees anything like that, I am sure there is going to be a very instant report to air traffic control, who would then have to make a judgement on how dangerous the situation was.”

The Civil Aviation Authority said there were serious consequences for people who broke the rules when flying drones.

“Drone users have to understand that when taking to the skies they are potentially flying close to one of the busiest areas of airspace in the world – a complex system that brings together all manner of aircraft including passenger aeroplanes, military jets, helicopters, gliders and light aircraft,” a spokesman said.

“Anyone operating a drone must do so responsibly and observe all relevant rules and regulations. The rules for flying drones are designed to keep all airspace users safe. It is totally unacceptable to fly drones close to airports and anyone flouting the rules can face severe penalties including imprisonment.”