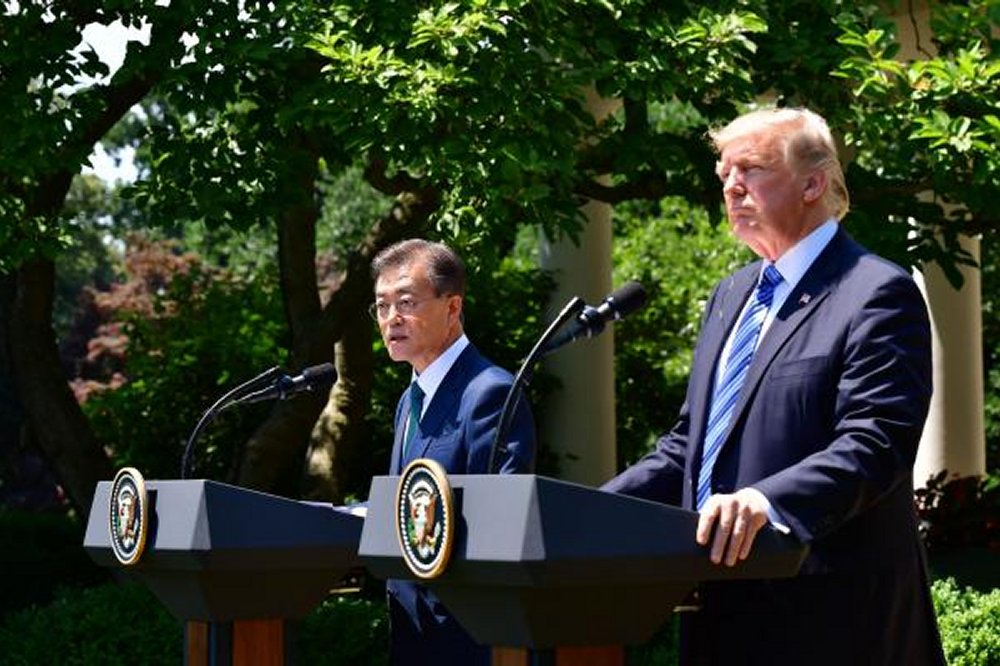 Trump and Moon said they had agreed on a comprehensive strategy aimed at ending the threat of a nuclear North Korea, though the two leaders did not speak in specifics about the plan.

Instead, Trump called North Korea a “menace” and sought support from countries in Asia to enact economic sanctions and help put pressure on the Kim regime in North Korea to give up its nuclear program.

“The era of strategic patience with the North Korean regime has failed. Many years it has failed. Frankly, that patience is over,” Trump said.

Friday’s Rose Garden press conference came a day after Trump hosted Moon for a White House dinner, the first such affair with a foreign leader since Trump took office.

The dinner also marked the first visit to the White House for Moon, who was elected president of his country in May.

Trump has said he wants South Korea to spend more money on its defense, including footing the bill for the $1 billion U.S. Terminal High Altitude Area Defense system, which South Korea flatly denied in April.

“There is no change in South Korea and the United States’ position that our government provides the land and supporting facilities and the U.S. bears the cost of THAAD system’s deployment, operation and maintenance,” South Korea’s Defense Ministry said in a statement.

Whether the topic was raised in private, neither leader addressed the question of military funding during their public statements Friday.

In addition to security measures Trump and Moon also spoke privately about the issue of their free trade agreement, which Trump called a “disaster” in April and described it as a “one-way street” that only benefits South Korea. At the time, he added that he “may terminate” it altogether.

But prior to the dinner, Moon gave a speech at the U.S. Chamber of Commerce where he praised a trade deal from which he said both countries benefit.

“South Korea’s carmakers are creating investment and employment in production factories in the U.S. Outstanding U.S. companies are also creating jobs in South Korea in industrial innovation and research and development,” Moon said.

During an Oval Office press availability prior to the formal Rose Garden press conference, Trump said he was working to form a “more equitable” trade agreement with South Korea.