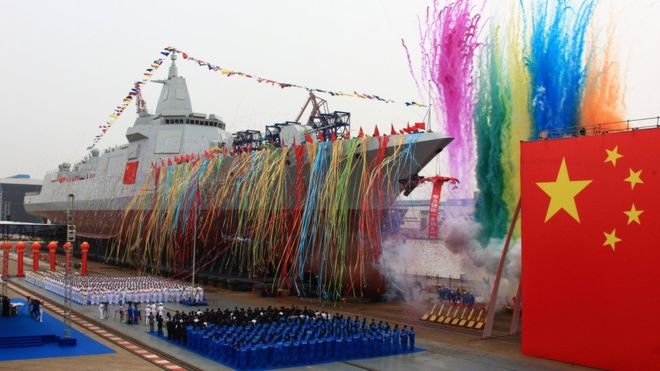 China on Wednesday launched a new type of domestically built warship in its latest bid to modernise its military, state media said.

The launch comes after China presented its first home-produced aircraft carrier in April.

Amid ongoing tensions in the South China Sea, Beijing is taking an increasingly assertive stance in the waters it claims.

According to the state-run Global Times, the vessel type is thought to be the first type 055 destroyer – a successor to the smaller type 052D destroyers.

Beijing has reasserted its “indisputable sovereignty” over parts of the South China Sea after the Trump administration vowed to prevent China from taking territory in the region.

The US has repeatedly sent military ships and planes near disputed islands, calling them “freedom of navigation” operations to ensure access to key shipping and air routes. Both sides have accused each other of “militarising” the South China Sea.

Rival countries have wrangled over territory in the vital waterway for centuries, but tension has steadily increased in recent years.

China, Vietnam, the Philippines, Taiwan, Malaysia and Brunei all have competing claims. China has backed its own claims with expansive island-building and naval patrols.

The new destroyer is seen as another landmark after April’s launch of the domestically built aircraft carrier.

It is the country’s second aircraft carrier, after an older, Soviet-built carrier bought from Ukraine.

As its economy expands, China has been modernising its armed forces.

In March, it announced it would increase its military budget by about 7% this year – the second year in a row that increases have been less than 10%, after nearly 20 years of larger increases.

Beijing’s defence budget still remains smaller than that of the US though.

While China plans to spend about 1.3% of its projected economic output in 2017 on defence, the US spends roughly 3% on the military. Given that the US economy is larger, the dollar value difference is enormous.