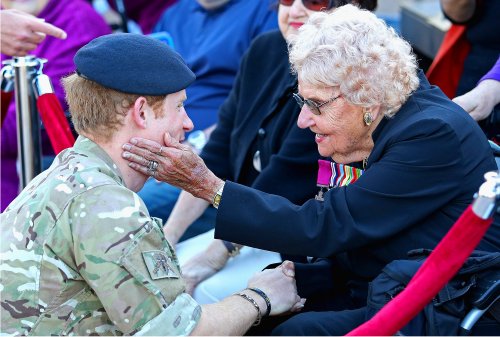 Prince Harry admits that he “didn’t want to grow up” and considered giving up his title — before deciding to create a new role for himself within the royal family.

In an interview with the Mail on Sunday, the 32-year-old revealed that he considered living an ordinary life following his time in the army, calling his time in service the “best escape I’ve ever had.”

“I felt as though I was really achieving something,” Harry said. “I have a deep understanding of all sorts of people from different backgrounds and felt I was part of a team.”

He continued, “I wasn’t a Prince, I was just Harry.”

After 10 weeks in Afghanistan in 2007, however, the royal had to be pulled for security reasons due to a magazine leaking his location.

“I spent many years kicking my heels and I didn’t want to grow up,” he shared, pointing to his years of headline-making partying that followed.

When he decided to turn things around, Harry considered leaving the royal life behind and live as a commoner.

“I felt I wanted out but then decided to stay in and work out a role for myself,” he said, adding that his loyalty to Queen Elizabeth, his grandmother, helped him in his decision.

Still, Harry wanted to be more than just famous figure who waved to the crowds who gathered to catch a glimpse of him and his family.

“We don’t want to be just a bunch of celebrities but instead use our role for good,” he said.

Prince Harry now works with a number of charities, including his Invictus Games, a multi-sport event created specifically for wounded, injured or sick armed services personnel.

“We are incredibly passionate with our charities and they have been chosen because they are on the path shown to me by our mother,” he said. “I love charity stuff and meeting people.”

Related Topics:EntertainmentPrince Harry
Up Next

HBO has renewed Silicon Valley for a fifth season