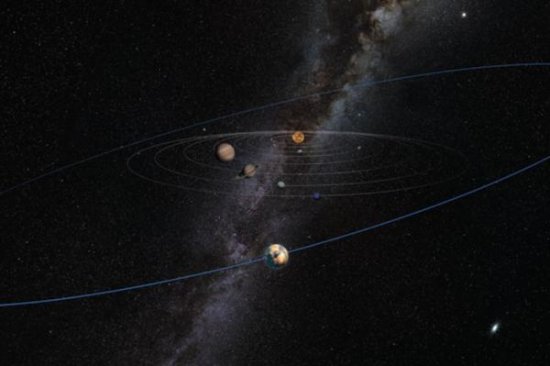 Astronomers have yet to confirm the existence of a ninth planet lurking beyond Pluto. But new analysis of the Kuiper Belt suggests a planetary mass is likely hiding in the outer reaches of the solar system.

The orbital planes of several rings of rocks in the Kuiper Belt — the disk of asteroid and frozen volatiles spinning beyond Neptune — are askew. New research suggests the rocks’ orbits were tilted off axis by the gravity of an unseen mass, a possible ninth planet.

Astronomers at the University of Arizona measured an average orbital tilt of roughly 8 degrees.

“According to our calculations, something as massive as Mars would be needed to cause the warp that we measured,” Kat Volk, an astronomer at Arizona’s Lunar and Planetary Laboratory, said in a news release.

The rock, metal and ice masses found in the Kuiper Belt don’t follow smooth, easily traceable trajectories like the orbit of a large planet — they’re unstable. Kuiper Belt objects wobble like tops, but by averaging their orbital orientation astronomers can search out a pattern.

“Imagine you have lots and lots of fast-spinning tops, and you give each one a slight nudge,” said researcher Renu Malhotra. “If you then take a snapshot of them, you will find that their spin axes will be at different orientations, but on average, they will be pointing to the local gravitational field of Earth.”

“We expect each of the KBOs’ orbital tilt angle to be at a different orientation, but on average, they will be pointing perpendicular to the plane determined by the sun and the big planets,” Malhotra said.

As the planet of the Kuiper Belt extends out away from the sun, the gravity of the solar system’s largest masses become less influential. Thus, astronomers expected the plane to flatten out the farther away it gets.

“We found that the average plane actually warps away from the invariable plane,” said Malhotra.

Researchers published the results of their Kuiper Belt survey in the Astrophysical Journal.

But why haven’t astronomers observed a ninth planet directly? Volk and Malhotra say scientists haven’t looked that hard. Most sky surveys avoid the crowded orbital plane to gain unfettered views of the universe beyond our solar system.

Researchers hope the Large Synoptic Survey Telescope, which is scheduled to make its first observations in 2020, will help scientists solve the mystery of the missing ninth planet.

“We expect LSST to bring the number of observed KBOs from currently about 2000 to 40,000,” Malhotra said. “There are a lot more KBOs out there — we just have not seen them yet. Some of them are too far and dim even for LSST to spot, but because the telescope will cover the sky much more comprehensively than current surveys, it should be able to detect this object, if it’s out there.”