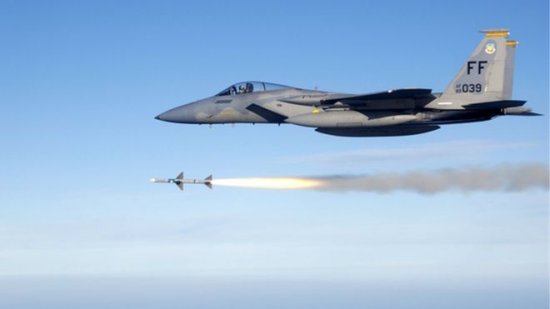 A US jet has shot down an Iranian-made drone operated by forces backing the Syrian government in the south of the country, American officials say.

The F-15 plane downed the drone around 00:30 on Tuesday (21:30 GMT Monday) north-east of Tanf, according to a US military statement.

The drone was thought to be armed and threatening US troops on the ground, officials said.

Tanf, near the borders with Iraq and Jordan, is home to a coalition base.

If confirmed, it is the second downing of a drone this month.

A Syrian jet was also shot down in northern Syria on Sunday evening.

Russia, which has an air contingent deployed in Syria in support of President Bashar al-Assad, warned after that attack that it would track coalition aircraft with missile systems and military aircraft, though it stopped short of openly saying it would shoot them down.

The Tanf base has been used by Western special forces.

“They were threatening our forces on the ground,” a US official quoted by AFP said of the drone shot down on Tuesday. “Their course was on a run toward our folks to drop a munition on them.”

Military officials who spoke to CNN described the drone as a Shahed 129, a model unveiled by Iran in 2012.

It is described by the Iranians as having a range of 2,000km (1,240 miles) and capable of carrying bombs and missiles.

The last drone the US says it shot down was also reportedly destroyed near Tanf after firing on coalition forces.

The Syrian plane destroyed on Sunday, a Su-22 fighter bomber, was hit after reportedly dropping bombs near the town of Tabqa in Raqqa province.

As well as announcing that US-led coalition warplanes would be tracked, Russia’s ministry of defence also suspended a hotline set up to avoid clashes between US and Russian aircraft over Syria.