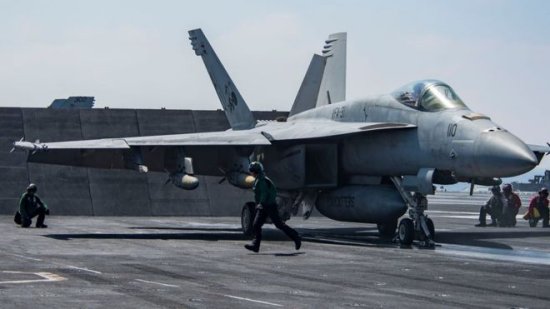 A US-led coalition fighter jet has shot down a Syrian military plane in Raqqa province, the US has confirmed.

The SU-22 fighter bomber was engaged by an F/A-18E Super Hornet after it had dropped bombs near the US-backed Syrian Democratic Forces, the Pentagon said.

It is the first time in the Syrian conflict that the US-led coalition has shot down a Syrian jet.

Syria condemned what it called a “flagrant attack” that would have “dangerous repercussions”.

In a separate incident, Iran’s Revolutionary Guards said they had launched several missiles from Iran into eastern Syria on Sunday, targeting IS fighters.

The SU-22 incident took place on Sunday afternoon near the town of Tabqa, where the Syrian Democratic Forces (SDF) have been fighting Islamic State militants as part of a drive to retake the city of Raqqa, the IS stronghold further to the east.

It is believed to be the first air-to-air kill of a manned aircraft by a US military jet since the Kosovo campaign in 1999.

The Pentagon said that pro-government militiamen had attacked SDF units, driving them from the town of Ja’Din.

The pro-government forces are not fighting the battle for Raqqa, but they have been making ground against IS in the surrounding area, south-west of the city.

The US-led coalition conducted what the Pentagon said was a “show of force” – a reported buzzing of the pro-government troops by jets – to stop the attack and then called the Syrian government’s ally, Russia, to try to “de-escalate the situation and stop the firing”.

However, the SU-22 dropped bombs on SDF positions a few hours later, the Pentagon said, and “in accordance with rules of engagement and in collective self-defence of Coalition-partnered forces [the plane] was immediately shot down”.

Attempts to warn the plane away using an emergency radio frequency failed, the US Central Command said.

The Pentagon statement added: “The demonstrated hostile intent and actions of pro-regime forces toward Coalition and partner forces in Syria conducting legitimate counter-Isis (IS) operations will not be tolerated.”

The Pentagon statement said the coalition did “not seek to fight the Syrian regime, Russian or pro-regime forces partnered with them, but will not hesitate to defend coalition or partner forces from any threat”.

The Syrian army said its warplane was on a mission against IS when it came under fire, according to state television.

It said the incident would have “dangerous repercussions” on efforts to fight terrorism.

An army statement said the pilot of the plane was missing.

The “flagrant attack was an attempt to undermine the efforts of the army as the only effective force capable with its allies… in fighting terrorism across its territory,” it said.

Russian Foreign Minister Sergei Lavrov said that “all countries must fully respect the sovereignty and territorial integrity of Syria” but the BBC’s Steve Rosenberg in Moscow says that, given Russia is such a staunch supporter of President Bashar al-Assad, this is a muted response.

Although this is the first time the coalition has shot down a Syrian jet, there have been an increasing number of incidents between the two sides:

On Sunday, Iran’s Revolutionary Guards said they had fired mid-range ground-to-ground missiles from a site in western Iran targeting “the headquarters and meeting place and suicide car assembly line” of “IS terrorists” in Deir al-Zour province.

The Guards said a “large number” of militants had been killed and equipment and weapons were destroyed.

The missiles were apparently in response to an IS-claimed attack on the Iranian parliament earlier this month which killed more than a dozen people.

“The spilling of any pure blood will not go unanswered,” a Guards statement said.

Iran has been a key ally of Syrian President Bashar al-Assad, sending military advisers and thousands of “volunteer” troops.