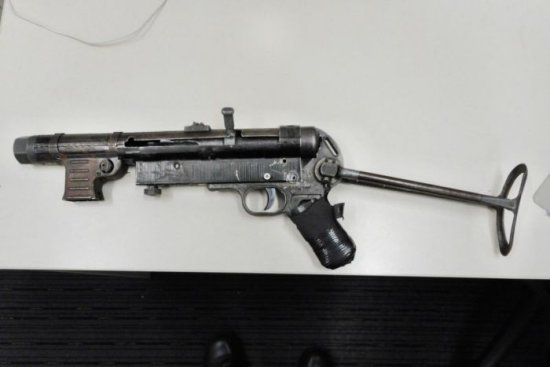 Officers searched a car on the Central Coast of New South Wales on Sunday night and found an MP40 sub-machine gun plus 60 rounds of ammunition.

The weapon was developed in Nazi Germany – more than a million were produced during the war.

A 40-year-old man, who was a passenger in the car, was charged with possessing a prohibited firearm.

Police said he was refused bail and would appear at Wyong Local Court on Monday.

A forensic examination will be carried out on the firearm to determine whether can be linked to any shooting incidents.

The gun was missing its barrel but police said initial examinations suggested it was in working order.

Australia has very strict gun control laws. All firearms must be registered, and to use one a person must hold a licence.

But it is estimated that there are as many as 260,000 illicit guns in circulation.

Last week, Australia brought in a national gun amnesty because of the growing terrorism threat and an influx of illegal arms in the country.

A similar amnesty was held after the 1996 shootings in Port Arthur, Tasmania, in which 35 people were shot dead.

About 650,000 firearms were destroyed in that amnesty, and gun crimes dropped rapidly.