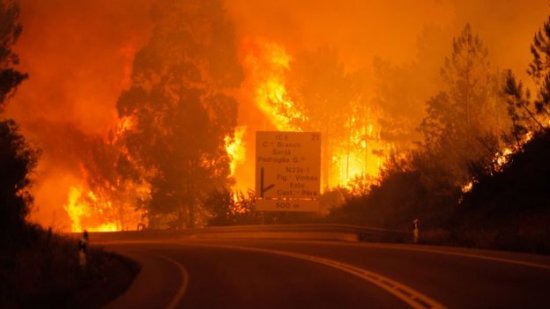 A catastrophic forest fire in Portugal has claimed at least 57 lives, officials say.

Many died while trying to flee the Pedrógão Grande area, 50 km (30 miles) south-east of Coimbra, in their cars, according to the government.

Several firefighters are among the 59 people injured.

“Unfortunately this seems to be the greatest tragedy we have seen in recent years in terms of forest fires,” said Prime Minister Antonio Costa.

The death toll could rise further, he said.

Media in Portugal said the fire is no closer to being contained despite about 600 firefighters working to put them out.

Among the 59 injured was an eight-year-old girl with burns found wandering alone close to the fire, the Correio do Manhã newspaper reported.

The Correio do Manhã warned that many areas hit by the fire had not yet been reached by authorities, so the death toll was likely to increase.

About 60 forest fires broke out across the country overnight, with close to 1,700 firefighters battling them across Portugal.

It is not yet known what caused the fire, however Mr Costa said thunderstorms could have been one possible cause.

Portugal has been experiencing a heatwave, with temperatures of more than 40C (104F) in some areas.

“This is a region that has had fires because of its forests, but we cannot remember a tragedy of these proportions,” said Valdemar Alves, the mayor of Pedrógão Grande, was quoted as saying by the Associated Press agency.

“I am completely stunned by the number of deaths.”