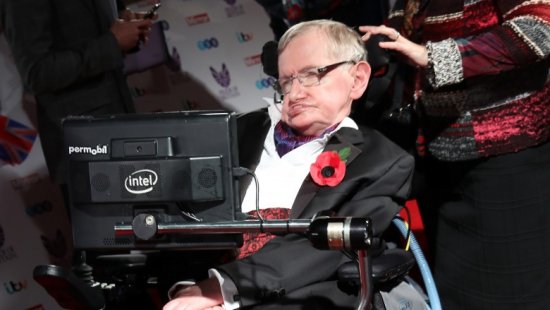 Stephen Hawking is the mega-genius physicist behind A Brief History of Time, a book that many own but few have probably ever read. He’s also done about a billion different super-smart things, and was responsible for bringing together a bunch of disparate scientific ideas and proving them by being, you know, way smarter than us. But here’s our chance to pretend we’re actual, real-life smart people, as we unveil the sides of Stephen Hawking many don’t know about.

He was diagnosed at 21 and given three years to live

Before Hawking even started discovering mind-bending scientificy science stuff (that’s a scientific term), he was already defying it! See, when Hawking was only 21, he was diagnosed with Amyotrophic Lateral Sclerosis (AKA Lou Gehrig’s Disease, AKA Why Everyone Dumped Ice Water On Their Heads That One Time), and doctors told he only had three years to live.

Hawking, upon hearing the news, promptly took one look at Death and said, “Nah, I’m good,” and proceeded to live until the ripe old age of he’s still alive. The guy who was supposed to croak at 21 is still going at the age of seventy-four! While we’re not mathematicians, we calculate that to be roughly a bunch more years than the doctors gave him. This must make his current doctor super-nervous when saying anything to the man during his annual physical.

He was married twice, and has three children

While the popular image of Stephen Hawking is “loner genius,” he actually — statistically — has gotten more action than many did in High School. (We should know.) He was married twice and even had three children, proof that theoretical discussions on the true nature of the cosmos is the ultimate aphrodisiac.

Also, despite the typical narrative for the children of a genius is for them to become bitter and become even more powerful than their parent, it seems none of his children have risen up to challenge him … yet. One of his children, Lucy Hawking, even writes books with him, for young children interested in science! It’s basically Not Star Wars, where the child actually joined the parent to rule the Universe together.

Unfortunately, not everything was white-picket-fence-and-roses. See, while you might think being married to one of the most clever people on Earth is amazing, it’s actually, well … pretty hard.

He made his wife suicidal and then left her

Stephen Hawking’s love life certainly isn’t pristine, as this entry’s title more than indicates. His first wife didn’t have to just raise her three children pretty much by herself, but she also had to help take care of Stephen. Remember how we said he was only supposed to live three years? Well, he beat that, but that doesn’t mean it was easy — he had a long, rough go of it, with many operations, and through it all, taking care of him was Jane.

Stephen had said, about himself, that he couldn’t have a psychological and physical illness. Jane took that upon herself, not letting her feel, well, the pressure of the entire situation. He drifted even farther away as he became more famous, until it felt like her and her children were nothing but footnotes in his life.

What almost certainly made the whole thing even worse is that Hawking left her for one of his nurses, whom he later married! Thankfully, Jane never actually followed through on her suicidal despair, but she does claim she still loves him. True love? Stockholm Syndrome? Who knows?

It didn’t get any better with his second wife, whom he also divorced, with his assistant even saying that people asking him about it was “annoying” and a “distraction.” Ouch. But don’t feel too bad for Stephen — he’s got the unending blackness of space’s love to keep him warm.

You know how big-time celebrities like to go to hospitals dressed up as superheroes to cheer up children? It’s a pretty neat thing for them to do. Well, Stephen Hawking, on many occasions, would take trips to meet with disabled children in hospitals, perhaps to show them that even if you’re disabled, you can make black holes with your minds. (That’s what he does, right?)

Of course, meeting with children isn’t all he’s done to help other people with disabilities. He fights for the rights to assisted dying, raises money for charities, participated in the Ice Bucket Challenge (using his kids as stand-ins, like any good evil genius) and has even been involved in the Paralympics. Yet even with all of those effective and positive things he’s done, the meeting children in the hospital one seems the coolest. He’s like a real-life, albeit immobile, superhero.

He loves Superman and Lois Lane

Stephen Hawking, perhaps in an effort to prove that even nerds can be dorks, has said that he wishes he had Superman’s powers … and that when he was younger, he had a crush on Lois Lane. To be honest, though, who doesn’t? She’s awesome. Specifically, he had a crush on Margot Kidder, who played Lois Lane in the Christopher Reeve movies.

Honestly? We can actually see Hawking as Superman, like, for real. We’re thinking Hawking can actually see through dimensions, and is only saying he’d be Superman to mess with the few of us who remember the previous Universe before the Great Upheaval. Of course, while he digs Superman (or is him), Hawking would much rather be a villain on the big screen …

He wants to be a Bond Villain

Not just any villain, either, a Bond villain! And you know, he does fit the description of a Bond villain. He’s super-smart, he has a disability, talks kinda weird, and he’s British! He even mentioned all of those things in saying why he’d be a perfect choice, so basically the ball’s in the Bond people’s court. Hell, he’s basically already a Bond villain in real life, except without any overtly evil plans for the world … probably.

He’s not messing around either — this isn’t some like sparkle-in-the-eye daydream. He really does want this, and it’s not like it’s out of the question. He’s been in movies before, and Monty Python, so why not another British icon? (No, we don’t know why he wouldn’t rather be Lex Luthor, who gets a BAMF-looking exoskeleton suit, but fine, let Eisenberg keep playing Luthor. We’re sure that won’t get annoying.)

He talks using his cheek muscle

So you might be wondering how Stephen Hawking can communicate given that he can’t, you know, move. Well you’re wrong about that! He can move … his cheek muscle. That’s right, he communicates by using his cheek muscle, to type and … okay, honestly, we have no idea how this actually works, so we’re going with science being magic. Basically, there’s a laser on his glasses scanning an alphabet of letters. When it gets to the one he wants, he twitches his cheek muscle and it recognizes that letter, then begins again. It’s kinda like how the kid on Speechless talks, except more sci-fi. So yes, magic.

To make Hawking talk takes a lot of different machines, which he talked about a ton in a long blog entry called The Computer which, to be honest, is about as dense as his books. Oh, and you know how he has a voice synthesizer? Well, the person who first invented that was Hawking’s second wife’s first husband. Yeah, the man invented what he uses to talk, and Hawking said thanks by stealing his wife! Stephen Hawking: genius, visionary, world-changer, cad.

Being the smartest guy in the history of ever and not being able to move would make anybody a little weird. So it almost makes sense he would collaborate with one of the most psychedelic bands in the world, the pig-loving Pink Floyd!

Yep, Stephen Hawking is in a Pink Floyd album — or rather, two. Yeah, the last two albums that Pink Floyd put out — The Division Bell and Endless River — featured Stephen Hawking on there as… a singer? Kind of? Maybe like a talk-singer, or a really slow non-rhyming rapper? Still makes more sense than whatever Syd Barrett put out.

He made an anti-obesity video

Stephen Hawking isn’t just a dude who tore holes in the Universe with his mind, or put his voice towards the best band in the world — he’s also someone who really, really hates obesity. Given that he can’t move at all, he doesn’t understand why so many perfectly mobile people are content to just never, ever move at all. He clearly doesn’t get that just because you can do something, doesn’t mean it’s fun. It’s the fact that we can choose not to be useless lumps that makes being one so much fun.

Hawking hates obesity so much, in fact, he even made a video against it, saying “Fortunately the solution is simple: More physical activity and change in diet … It’s not rocket science.” He might not be able to run five miles (as opposed to us, who could but we don’t wanna), but he’s sure got jokes.

He believes in aliens that WILL KILL US ALL

Hawking’s a genius scientist, so it makes sense that he believes in life beyond our planet, even if it isn’t the kind Mulder always finds and gets pouty about. See, he’s not saying that aliens exist on Earth or that all those UFOs are actually alien ships. He’s just saying that something’s out there, and if we ever find aliens, we should hide.

Yeah. He says that if we ever contacted aliens it’d be like … well, think of any time white people found a new continent and were all “ours now.” Yeah. That bad. By the way, this isn’t our analogy, but Hawking’s! He himself said, “If aliens visit us, the outcome would be much as when Columbus landed in America, which didn’t turn out well for the Native Americans.”

Basically, Hawking thinks that, if aliens come to Earth, it’ll be more Independence Day and less E.T. Wow. We never thought we’d say this, but apparently Independence Day is one of the more realistic alien movies out there. Time to work on giving our future invaders a cold.

Related Topics:LifestyleStephen Hawking
Up Next