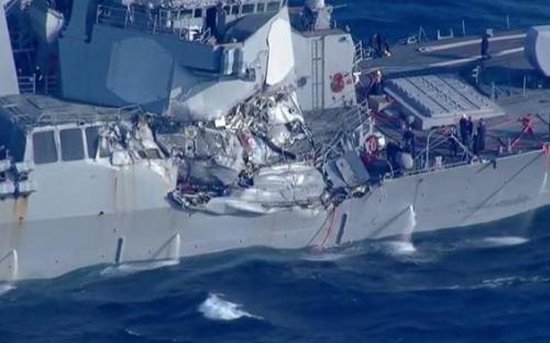 Seven U.S. sailors are unaccounted for and others were injured early Saturday after a Navy warship collided with a container ship in the Pacific off the coast of Japan, authorities said.

The collision occurred in the Philippine Sea between the merchant ship and the U.S. Navy’s guided missile destroyer USS Fitzgerald. The vessel’s commanding officer, Cmdr. Bryce Benson, had to be medically evacuated from the ship, officials said.

The Navy Times reported that the ship endured substantial damage and had limped back to land under its own power.

“The extent of number of personnel injuries is being determined,” the 7th Fleet said in a statement Friday.

The Navy said it was working with the Japanese Coast Guard to conduct a medical evacuation for one sailor, but did not specify if that was Cmdr. Benson.

The collision occurred southwest of Yokosuka, Japan, at about 2:30 a.m. local time.

“U.S. and Japanese support from the Navy, Maritime Self Defense Force and Coast Guard are in the area to ensure that the Sailors on USS Fitzgerald have the resources they need to stabilize their ship,” Admiral John Richardson, chief of naval operations, said in a statement.

The accident caused some flooding on the Fitzgerald, an Arleigh Burke-class Navy destroyer commissioned in 1995. It wasn’t clear what damage was sustained by the Philippine container ship.

Trump says he is under investigation in Russia inquiry