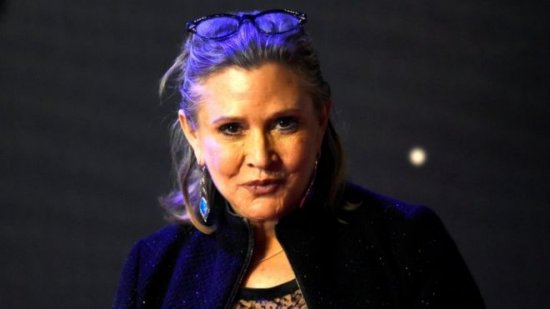 Her death certificate said in January that the 60-year-old, best known for her role as Princess Leia, had suffered a cardiac arrest.

But in a statement the LA coroner said the exact cause was unknown.

Sleep apnoea is a common condition in which a person stops breathing during sleep, either for a few seconds or minutes.

As well as listing sleep apnoea as a cause of death, the coroner’s statement cited other factors, including heart disease and drug use.

In a statement released to People magazine after the coroner’s ruling, Fisher’s daughter Lourd said: “My mom battled drug addiction and mental illness her entire life. She ultimately died of it.

“She was purposefully open in all of her work about the social stigmas surrounding these diseases.”

Her manner of death would be listed as undetermined, the coroner’s statement said.

Fisher had been on tour promoting her book The Princess Diarist when she was taken ill on a flight from London to Los Angeles on 23 December.

She never regained consciousness and died on 27 December at the Ronald Reagan UCLA Medical Centre.

The daughter of singer Eddie Fisher and Debbie Reynolds, Carrie Fisher made her film debut opposite Warren Beatty in 1975’s Shampoo.

She also appeared in The Blues Brothers, When Harry Met Sally and Hannah and Her Sisters, and provided the voice of Peter Griffin’s boss Angela in the adult animated sitcom Family Guy.

But her enduring fame is thanks to her role as Princess Leia in the original Star Wars trilogy. She will appear in the latest Star Wars sequel, The Last Jedi, which is to be released in December.

US singer Katy Perry is first to 100m Twitter followers