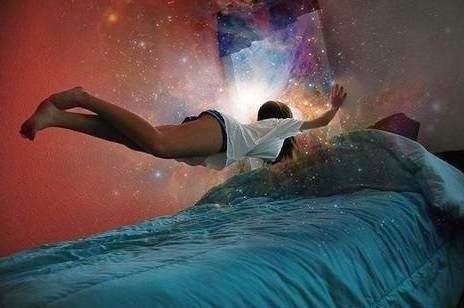 A lucid dream is a dream during which the dreamer is aware of dreaming. During lucid dreaming, the dreamer may be able to exert some degree of control over the dream characters, narrative, and environment.

The term ‘lucid dream’ was coined by Dutch author and psychiatrist Frederik van Eeden in his 1913 article A Study of Dreams, though obviously descriptions of dreamers being aware that they are dreaming predates the actual term.

History of the phenomenon
(History)

Early references to the phenomenon are found in ancient Greek writing. For example, the philosopher Aristotle wrote: ‘often when one is asleep, there is something in consciousness which declares that what then presents itself is but a dream’. Meanwhile, the physician Galen of Pergamon used lucid dreams as a form of therapy, In addition, a letter written by St. Augustine of Hippo in 415 AD tells the story of a dreamer, Doctor Gennadius, and refers to lucid dreaming.

In Eastern thought, cultivating the dreamer’s ability to be aware that he or she is dreaming is central to both the Tibetan Buddhist practice of dream Yoga, and the ancient Indian Hindu practice of Yoga nidra. The cultivation of such awareness was common practice among early Buddhists.

History of the phenomenon
(17th century)

Philosopher and physician Sir Thomas Browne (1605–1682) was fascinated by dreams and described his own ability to lucid dream in his Religio Medici, stating: ‘…yet in one dream I can compose a whole Comedy, behold the action, apprehend the jests and laugh my self awake at the conceits thereof’.

Also, Samuel Pepys in his diary entry for 15 August 1665 records a dream, stating: “I had my Lady Castlemayne in my arms and was admitted to use all the dalliance I desired with her, and then dreamt that this could not be awake, but that it was only a dream”.

History of the phenomenon
(19th century)

In 1867, the French sinologist Marie-Jean-Léon, Marquis d’Hervey de Saint Denys anonymously published Les Rêves et Les Moyens de Les Diriger; Observations Pratiques (‘Dreams and the ways to direct them; practical observations’), in which describes his own experiences of lucid dreaming, and proposes that it is possible for anyone to learn to dream consciously.

History of the phenomenon
(20th century)

Some have suggested that the term is a misnomer because van Eeden was referring to a phenomenon more specific than a lucid dream. Van Eeden intended the term lucid to denote “having insight”, as in the phrase a lucid interval applied to someone in temporary remission from a psychosis, rather than as a reference to the perceptual quality of the experience, which may or may not be clear and vivid.

In 1968, Celia Green analyzed the main characteristics of such dreams, reviewing previously published literature on the subject and incorporating new data from participants of her own. She concluded that lucid dreams were a category of experience quite distinct from ordinary dreams, and predicted that they would turn out to be associated with rapid eye movement sleep (REM sleep). Green was also the first to link lucid dreams to the phenomenon of false awakenings.

The first peer-reviewed article on the subject was published by Stephen LaBerge at Stanford University, who developed such techniques as part of his doctoral dissertation. In 1985, LaBerge performed a pilot study that showed that time perception while counting during a lucid dream is about the same as during waking life. Lucid dreamers counted out ten seconds while dreaming, signaling the start and the end of the count with a pre-arranged eye signal measured with electrooculogram recording. LaBerge’s results were confirmed by German researchers D. Erlacher and M. Schredl, in 2004.

Neuroscientist J. Allan Hobson has hypothesized what might be occurring in the brain while lucid. The first step to lucid dreaming is recognizing one is dreaming. This recognition might occur in the dorsolateral prefrontal cortex, which is one of the few areas deactivated during REM sleep and where working memory occurs. Once this area is activated and the recognition of dreaming occurs, the dreamer must be cautious to let the dream continue but be conscious enough to remember that it is a dream. While maintaining this balance, the amygdala and parahippocampal cortex might be less intensely activated. To continue the intensity of the dream hallucinations, it is expected the pons and the parieto-occipital junction stay active.

Using Electroencephalography (EEG) and other Polysomnographical measurements, LaBerge and others have shown that lucid dreams begin in the Rapid Eye Movement (REM) stage of sleep. LaBerge also proposes that there are higher amounts of beta-1 frequency band (13–19 Hz) brain wave activity experienced by lucid dreamers, hence there is an increased amount of activity in the parietal lobes making lucid dreaming a conscious process.

Some skeptics of lucid dreaming suggest that it is not a state of sleep, but of brief wakefulness, or “micro-awakening”. Experiments by Stephen LaBerge used “perception of the outside world” as a criterion for wakefulness while studying lucid dreamers, and their sleep state was corroborated with physiological measurements.

Philosopher Norman Malcolm has argued against the possibility of checking the accuracy of dream reports, pointing out that ‘the only criterion of the truth of a statement that someone has had a certain dream is, essentially, his saying so.’

Paul Tholey, a German oneirologist and Gestalt theorist, laid the epistemological basis for the research of lucid dreams, proposing seven different conditions of clarity that a dream must fulfill in order to be defined as a lucid dream:

Later, In 1992, a study by Deirdre Barrett examined whether lucid dreams contained four “corollaries” of lucidity:

Barrett found less than a quarter of lucidity accounts exhibited all four.

Subsequently, Stephen LaBerge studied the prevalence of being able to control the dream scenario among lucid dreams, and found that while dream control and dream awareness are correlated, neither requires the other. LaBerge found dreams that exhibit one clearly without the capacity for the other; also, in some dreams where the dreamer is lucid and aware they could exercise control, they choose simply to observe.

It has been suggested that sufferers of nightmares could benefit from the ability to be aware they are indeed dreaming. A pilot study was performed in 2006 that showed that lucid dreaming therapy treatment was successful in reducing nightmare frequency. This treatment consisted of exposure to the idea, mastery of the technique, and lucidity exercises. It was not clear what aspects of the treatment were responsible for the success of overcoming nightmares, though the treatment as a whole was said successful.

Australian psychologist Milan Colic has explored the application of principles from narrative therapy to clients’ lucid dreams, to reduce the impact not only of nightmares during sleep, but also depression, self-mutilation, and other problems in waking life. Colic found that therapeutic conversations could reduce the distressing content of dreams, while understandings about life—and even characters—from lucid dreams could be applied to their lives with marked therapeutic benefits.

Holzinger, Klösch, and Saletu managed a psychotherapy study under the working name of ‘Cognition during dreaming – a therapeutic intervention in nightmares’, which included 40 subjects, men and women, 18–50 years old, whose life quality was significantly altered by nightmares. The test subjects were administered Gestalt group therapy and 24 of them were also taught to enter the state of lucid dreaming by Holzinger. This was purposefully taught in order to change the course of their nightmares. The subjects then reported the diminishment of their nightmare prevalence from 2–3 times a week to 2–3 times per month.

In her book The Committee of Sleep, Deirdre Barrett describes how some experienced lucid dreamers have learned to remember specific practical goals such as artists looking for inspiration seeking a show of their own work once they become lucid or computer programmers looking for a screen with their desired code. However, most of these dreamers had many experiences of failing to recall waking objectives before gaining this level of control.

Wikipedia and other resources

Related Topics:Lucid dreamScience
Up Next