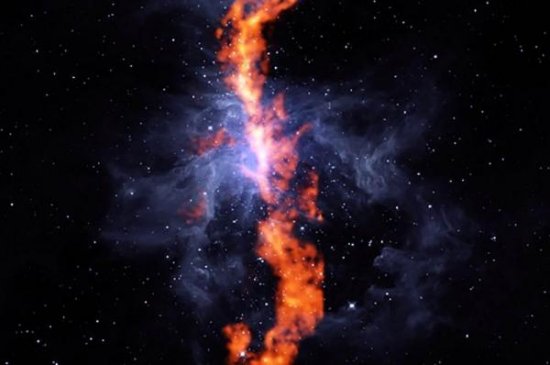 NASA’s Wide-field Infrared Survey Explore telescope has offered astronomers a detailed view of the star factory inside the Orion Nebula, one of the most famous and oft-photographed star-birthing clouds in the cosmos.

Scientists released a new composite image of the nebula this week, featuring data collected by both WISE and the Robert C. Byrd Green Bank Telescope in West Virginia.

The survey of Orion was part of an effort to analyze major star-forming regions within the northern half of the Gould Belt, a ring of young, bright stars in the Milky Way. By charting the temperatures and gas dynamics in the nebulas making up the Gould Belt, researchers hope to gain a better understanding of the star formation process.

“We still don’t understand in detail how large clouds of gas in our galaxy collapse to form new stars,” Rachel Friesen, an astronomer at the University of Toronto, said in a news release.

Astronomers are particularly interested in the role of ammonia gas in the star-formation process. The latest Orion Nebula data revealed ammonia molecules concentrated throughout the gas and dust filaments stretching more than 50 light-years in length.

“Ammonia is an excellent tracer of dense, star-forming gas, and these large ammonia maps will allow us to track the motions and temperature of the densest gas,” said Friesen. “This is critical to assessing whether gas clouds and filaments are stable, or are undergoing collapse on their way to forming new stars.”

The latest image and analysis is the first round of data to be released as part of the Green Bank Ammonia Survey. The observations were published in the Astrophysical Journal Supplement.