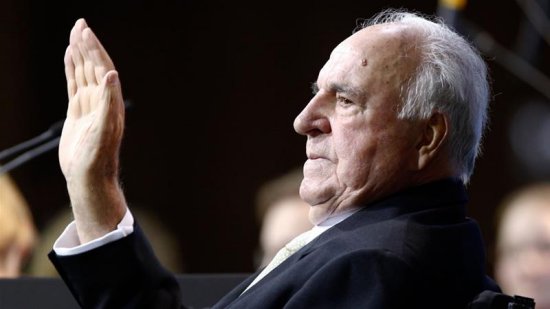 “We mourn,” Kohl’s Christian Democratic Union party (CDU) tweeted with a picture of the former chancellor.

Kohl led Germany through reunification in 1990 and was chancellor of first West Germany and then the unified nation from 1982 to 1998.

He had been frail and wheelchair-bound since suffering a bad fall in 2008, and was largely house-bound in his home in Ludwigshafen, in the western state of Rhineland-Palatinate.

Kohl led West Germany through a period of economic prosperity but always had an eye on East Germany amid thawing relations between the two.

After the fall of the Berlin Wall in 1989, Kohl took a huge political and personal risk by pushing for a quick reunification of East and West Germany.

The move paid off and a combined Germany went on to continue West Germany’s economic miracle, albeit with the East still much the poorer.

He easily won the 1990 federal elections amid the euphoria but had a reduced majority in 1994.

By 1998 he had lost much of his political lustre and was defeated in the elections by the Social Democratic Party’s (SDP) Gerhard Schroeder.

He was widely viewed by political scholars as the mentor of current Chancellor Angela Merkel, also of the CDU, before their relationship soured.

Related Topics:EuropeHelmut Kohl
Up Next