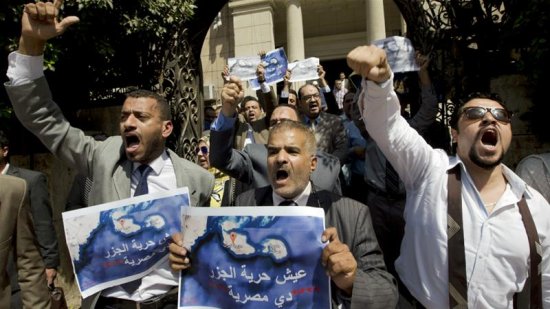 Egyptian police stormed the homes of political opponents of a disputed 2016 agreement to transfer control of two Red Sea islands to Saudi Arabia, arresting dozens in raids in Cairo and at least 10 provinces across the country.

Lawyers Mohammed Abdel-Aziz and Gamal Eid said the arrests on Thursday were made in raids staged before dawn or shortly before or after sunset, when Muslims break their dusk-to-dawn fast during the holy month of Ramadan.

The lawyers put the number of arrests until nightfall Thursday at between 32 and 40 and said those detained were mostly linked to secular democratic parties. The arrests came amid calls on social media for protests against the agreement to be held Friday at Cairo’s Tahrir Square, epicenter of a 2011 popular uprising that toppled the regime of longtime ruler Hosni Mubarak.

It was not immediately clear what kind of response the call for a protest on Friday would receive. A similar call, also over the islands, drew thousands last year, but police foiled their action by deploying in large numbers, beating up and arresting hundreds of protesters and activists.

The April 2016 protests were the largest in Egypt since Abdel Fattah el-Sisi, a general-turned-president, took office in 2014, a year after he led the ouster of Mohamed Morsi.

“The government has chosen more oppression rather than dialogue,” said Eid, one of the two lawyers. “The arrests are meant to distract anyone who intends to protest tomorrow and sow confusion in the ranks of the opposition.”

Thursday’s arrests came a day after a senior constitutional panel concluded that two courts that ruled to annul the transfer of the islands to Saudi Arabia had acted within their jurisdiction, defying parliament, which on Wednesday overwhelmingly backed the deal.

The government insists the islands of Tiran and Sanafir at the mouth of the Gulf of Aqaba were always Saudi but placed under Egypt’s protection in the early 1950s amid Arab-Israeli tensions. Critics have linked the islands transfer to the billions of dollars in Saudi aid given to Sisi’s government, saying it amounts to a sell-off of sovereign territory.

The government, loyal media, and lawmakers have gone to great lengths to support Saudi ownership of the islands, a stand that many Egyptians have found to be unusual and vexing given their strategic value.

Tiran, a popular destination for Red Sea divers, controls a narrow shipping lane that leads to and from the ports of Eilat and Aqaba, in Israel and Jordan, respectively. Egypt’s unilateral closure of that lane was among the main reasons behind the outbreak of the 1967 Arab-Israeli war.

“It is the first time in history … that a state volunteers to prove the right of another state to territory that is under its complete sovereignty and is linked to its national interest,” prominent columnist Abdullah el-Sennawy wrote Thursday.

“So much so, that some officials and lawmakers seemed more enthusiastic than the Saudis themselves” about the transfer of the islands, Sennawy said.