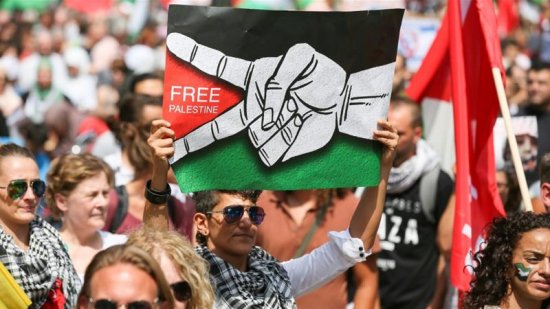 Activists in the UK have said they fear one of the largest Palestinian cultural events in Europe is at risk of being censored by the government.

Officials have given event organisers Friends of Al Aqsa (FOA) until Monday to respond to a letter warning that the two-day Palestine Expo 2017 event at the Queen Elizabeth II Conference centre (QE2) in London could be cancelled by the Department for Communities and Local Government, which manages the venue.

Palestine Expo 2017 bills itself as a celebration of Palestinian history, culture, food, and entertainment, and an FOA spokesperson said preparations for the event would continue regardless.

“We look forward to welcoming over 10,000 people to the biggest Palestine event in Europe to celebrate Palestine culture and heritage,” said FOA’s Shamiul Joarder, adding the governments move “appears to be a clear attempt to censor all things Palestinian, be it culture, heritage or politics”.

“Any threat to close down this two-day event celebrating Palestine is inexplicable. There is no justification.”

In a letter dated June 14, which has been seen by Al Jazeera, the department cites concerns about the organisation’s purported support of Hamas and Hezbollah – a claim FOA rejects.

Al Jazeera has also obtained a letter written by the lawyers of an Israeli lobby group, known as Jewish Human Rights Watch, addressed to QE2, which accuses FOA and a co-organiser, the Palestinian Solidarity Campaign (PSC), of supporting “Jew hate”.

“Our client is certain that this event is a front for Jew hate and that the main groups (Friends of Alaqsa and Palestine Solidarity Campaign) are organisations promoting Boycott, Divestment and Sanctions (BDS) in relation to Israel, a known anti-Semitic movement,” stated a letter by the lobby group’s solicitors.

FOA and PSC groups fervently rejected accusations of anti-Semitism and FOA said it would be taking legal action over what it described as “defamation”.

“The accusation of anti-Semitism based on our support for BDS is a feeble attempt to undermine legitimate dissent against Israeli occupation,” Joarder said.

Al Jazeera approached British officials for comment on whether they were responding to complaints from Israeli lobby groups.

A spokesperson for the department, did not respond to that specific request but did say a final decision on whether Palestine Expo would go ahead at the QE2 will be made once FOA has responded to the June 14 letter.

“We’ve written to Friends of Al Aqsa and will make a final decision once they’ve had a chance to respond,” the department said.

Writer and analyst Ben White, who is due to speak at the event, said any attempt to cancel it would be an attack on freedom of speech.

“It would be completely unacceptable for the government to stop ‘Palestine Expo’ from going ahead, at the behest of Israel’s die-hard defenders. This is a further attack on freedom of expression that should worry us all,” he said.

The move by British government officials comes months after a series of Al Jazeera investigative unit films exposed the influence lobbyists backed by the Israeli embassy had on a number of institutions within the country, including student groups and political parties.

Iraqi detainees launch case to halt deportation from US