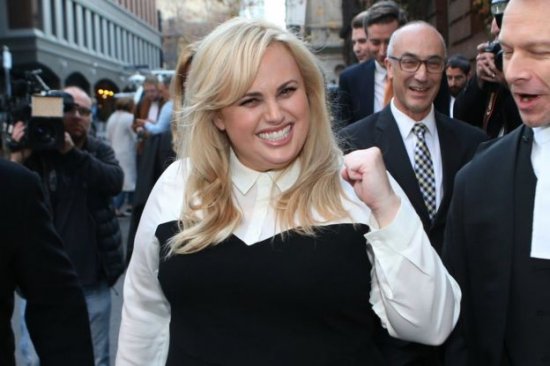 Australian actor Rebel Wilson has won a legal defamation case over a series of magazine articles she claimed ruined her career.

The Supreme Court of Victoria heard the pieces alleged she had lied about her name, age and upbringing in Australia.

Bauer Media denied the articles were defamatory but the six-woman jury sided unanimously in favour of Ms Wilson.

The Pitch Perfect actor, who was seeking unspecified damages, said she felt she “had to take a stand”.

“I had to stand up to a bully, a huge media organisation, Bauer Media, who maliciously took me down in 2015 with a series of grubby and completely false articles,” she told reporters outside court.

The level of damages will be decided at a later date.

Ms Wilson had returned to Melbourne from Los Angeles to give evidence at the three-week trial – she sat in court every day and spent six days in the witness box herself.

She claimed that eight articles published by Bauer magazine in 2015 had portrayed her as a serial liar, and that this resulted in her being sacked from two feature films.

In court she rapped, told jokes, did impersonations, repeated assertions she is distantly related to Walt Disney and broke down in tears.

Not a comedic performance

“When she’s participating in an interview, Ms Wilson must know… that she’s not giving a comedic performance,” she said.

“The stories that she tells on those occasions she must know are reported faithfully by journalists for the information of their readers.”

But closing her case, Ms Wilson’s lawyer, Dr Matthew Collins, QC, questioned why Bauer was unable to identify “a single person” to whom the actress had supposedly told a lie.

“The reason why they came up with nothing, of course, is obvious. Rebel Wilson has not lied,” he said. “Her claim is not about money, it is about restoring her reputation.”

Ms Wilson said she was compelled to take action because of the “disgusting and disgraceful” conduct by the tabloid media.

“I am glad, very glad, that the jury has agreed with me,” she told reporters.

“I just look forward to rebuilding my career now that the record has been set straight.”