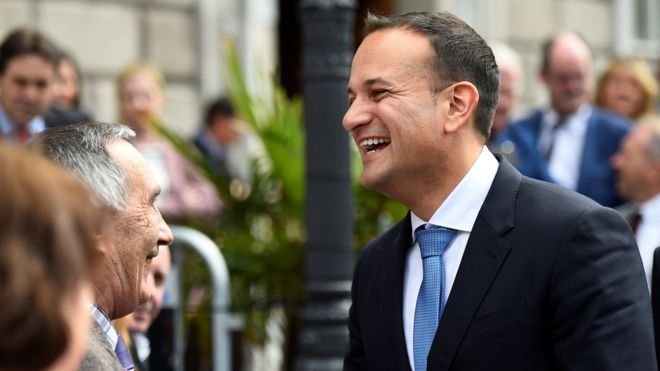 A parliamentary vote on Wednesday confirmed the 38-year-old as the country’s youngest and first gay leader by 57 votes to 50, with 47 abstentions.

The former GP, who is the son of an Irish nurse and a doctor from India, won the Fine Gael party leadership earlier this month.

He has made his leadership rival Simon Coveney the deputy leader of the party.

Addressing the Dáil (Irish parliament) after his election, Mr Varadkar said: “I’ve been elected to lead but I promise to serve.”

“The government that I lead will not be one of left or right because those old divisions don’t comprehend the political challenges of today.

“The government I lead will be one of the new European centre as we seek to build a republic of opportunity.”

Mr Varadkar then travelled to the president’s residence, Áras an Uachtaráin, where President Michael D Higgins gave him the seals of office to officially confirm his appointment.

Former Taoiseach Enda Kenny nominated Mr Varadkar to succeed him at the start of Wednesday’s Dáil proceedings, saying that he would carry out the role with integrity and skill.

“As the country’s youngest holder of this office, he speaks for a new generation of Irish women and Irish men,” he said.

“He represents a modern, diverse and inclusive Ireland and speaks for them like no other, an Ireland in which each person can fulfil their potential and live their dreams.”

Among the first to congratulate the new taoiseach was the President of the European Commission, Jean-Claude Juncker, who emphasised the common challenge posed by Brexit.

“I am confident that we will develop a close working relationship to tackle the various challenges facing Ireland and the European Union that lie ahead, including the consequences of the decision of the UK to leave the EU,” he said.

Who is Leo Varadkar?

The former GP is the son of an Irish nurse and a doctor from India.

He was first elected as a councillor at the age of 24 and took a seat in the Dáil in 2007.

Shortly before the 2015 same-sex marriage referendum in Ireland he came out as gay during an interview with Irish national broadcaster RTÉ.

His views are regarded as a centre-right politically due to his approach to socio-economic issues.

In 2011, Fine Gael appointed Mr Varadkar as the minister for transport, tourism and sport – and then health minister.

Related Topics:EuropeIrelandLeo Varadkar
Up Next