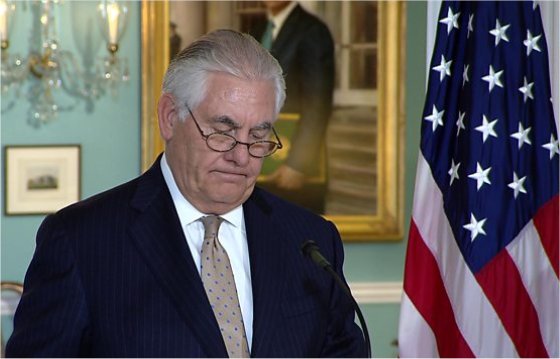 Nations behind a blockade on Qatar have welcomed strong comments from President Donald Trump backing their move, but were silent on calls from his secretary of state to ease the measures.

But the states did not respond to Secretary of State Rex Tillerson’s warning of humanitarian consequences.

He said: “I decided with Rex Tillerson that the time had come to call on Qatar to end funding and extremist ideology in terms of funding.”

Mr Trump said he wanted Qatar “back among the unity of nations”.

However, the tone of his comments contrasted with those of Mr Tillerson, who had earlier said the blockade was having humanitarian consequences.

He said the blockade was “impairing US and other international business activities in the region” and that the US backed mediation efforts being pursued by Kuwait.

On Saturday, Saudi Arabia, Bahrain and the UAE made no mention of Mr Tillerson’s call.

In Saudi Arabia, an official source told the Saudi Press Agency that Qatar must change its policy, saying: “Fighting terrorism and extremism is no longer a choice, rather… a commitment requiring decisive and swift action to cut off all funding sources for terrorism.”

Bahrain’s official BNA news agency stressed “the necessity of Qatar’s commitment to correct its policies and to engage in a transparent manner in counter-terrorism efforts”.

UAE ambassador to the US Yousef al-Otaiba praised Mr Trump’s leadership in the face of Qatar’s “troubling support for extremism”.

He said: “The next step is for Qatar to acknowledge these concerns and commit to re-examine its regional policies.”

Monday’s dramatic move came after years of tension between Qatar and its Gulf neighbours, in particular Saudi Arabia.

Qatar’s Sheikh Mohammed says his country has been isolated “because we are successful and progressive”, calling his country “a platform for peace not terrorism”.

Russian Foreign Minister Sergei Lavrov, who met him in Moscow on Saturday, expressed concern at what he called the “sharp deterioration in the situation in the Arab world”, and said Russia would do what it could to ease the situation.

“We do not interfere in the internal affairs of other countries or their bilateral relations. But it does not give us joy when relations between our partners deteriorate,” Mr Lavrov said.

On Friday, Turkish President Recep Tayyip Erdogan said he had never known Qatar to support terrorist groups and called for the blockade to be fully lifted.