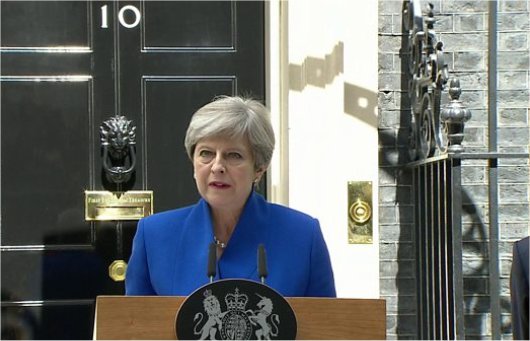 Nick Timothy and Fiona Hill, Theresa May’s closest advisers, have resigned in the wake of the Conservatives’ failure to win the general election.

The PM had been warned she faced a leadership challenge on Monday unless she sacked the pair, the BBC understands.

Mr Timothy said said he accepted responsibility for his role in the Tory manifesto, criticised by many MPs.

He said he regretted not including a pledge to cap total social care costs.

Mrs May has said she intends to stay as prime minister despite failing to win a Conservative majority in the election.

The Tories needed 326 seats to win but fell short by eight. The DUP won 10.

She is expected to finalise her team of ministers later as she seeks to lead a government with the support of the Democratic Unionist Party.

Labour has urged Mrs May to “make way” for it to form a government and she also faces criticism over the DUP deal.

The leader of the Scottish Conservatives, Ruth Davidson, tweeted a link to a speech she had made about same-sex marriage – something the DUP opposes.

A number of high-profile government figures have already confirmed they are keeping their jobs in the wake of an election that saw the Tories lose 13 seats.

Philip Hammond will stay as chancellor, Boris Johnson will remain as foreign secretary and Amber Rudd – narrowly re-elected as an MP after a recount – will continue as home secretary.

David Davis will also stay on as Brexit secretary and Sir Michael Fallon will keep his role as defence secretary.

There could be changes elsewhere in the cabinet while nine middle-ranking and junior ministers, including Ben Gummer and Jane Ellison, lost their seats at the general election and will need to be replaced.

But BBC assistant political editor Norman Smith said the prime minister had been facing calls from MPs to remove her joint chiefs of staff, who have been blamed for the failure to win the election – and adopt a “very different approach and style of leadership”.

Mrs May’s director of communications until the election was announced, Katie Perrior, called the campaign “pretty dysfunctional”, telling the BBC she “needed to broaden her circle of advisers and have a few grey hairs in there who been around a bit and could say ‘don’t do that'”.

Norman Smith said he understood that senior Conservatives had warned the PM they would instigate a leadership contest at a meeting of Conservative backbenchers early next week if the pair did not leave, and were confident they could get the required 48 signatures to trigger a contest.

The calls to change her style of leadership, her advisers and the way she runs Downing Street come after criticism mounted over the decision to call a snap election and the way the campaign was run.

Mrs May announced her intention to work with the DUP to form a government on Friday, just hours after an election that left the UK with a hung parliament for the second time in seven years.

Speaking on the steps of No 10 after an audience with the Queen, the prime minister said the parties had a “strong relationship” and that she intended to form a government which could “provide certainty and lead Britain forward at this critical time for our country”.

DUP leader Arlene Foster confirmed she had spoken to Mrs May and that they would speak further to “explore how it may be possible to bring stability to this nation at this time of great challenge”.

Mrs May’s decision to seek a deal with the DUP has prompted concerns from some Tories.

Charles Tannock, a Conservative member of the European Parliament, said the DUP was a “hardline, populist, protectionist” party and a “poor fit” as a partner for the Conservatives.

Northern Ireland is the only part of the UK where same-sex marriage is not legal.

Ms Davidson, who is gay, plans to marry her partner in the near future and said she had been “straightforward” with Mrs May about her concerns.

“I told her that there were a number of things that count to me more than the party,” she told the BBC. “One of them is country, one of the others is LGBTI rights.

“I asked for a categoric assurance that if any deal or scoping deal was done with the DUP, there would be absolutely no rescission of LGBTI rights in the rest of the UK, in Great Britain, and that we would use any influence that we had to advance LGBTI rights in Northern Ireland.”

Ms Davidson clearly plans to use her influence to try to affect the Brexit negotiations as well, suggesting that she believes the UK should try to remain in the EU single market, our editor adds.

Other members of the party have criticised Mrs May for staying on in Downing Street after failing to secure a majority government.

Former business minister Anna Soubry called for her to “consider her position” after a “disastrous” election campaign.

Labour has also demanded her resignation, with leader Jeremy Corbyn saying Mrs May should “make way” for a government that would be “truly representative of the people of this country”.

Mr Corbyn, who is expected to announce his shadow cabinet on Sunday, said his party was ready to form a minority government of its own, but stressed he would not enter into any “pacts or deals” with other parties.

Speaking on the BBC’s Question Time, Transport Secretary Chris Grayling defended the prime minister, saying she needed to stay in the role for the “foreseeable future”.

“Not only must she not resign, she has to not resign in the interest of the country because we need to move forward, we have got to go into the Brexit negotiations,” he added.

Ex-foreign secretary Lord Hague said his party had to learn “very serious” lessons from the election, saying the campaign was short of “vision and hope for the future”.

“The awful truth is no party has given up such an advantageous situation with such speed in the modern electoral history of our country,” he wrote in the Daily Telegraph.

But he said a change of leader would only cause “further uncertainty and upheaval”.

Putin: ‘I didn’t even really talk’ to Flynn during dinner