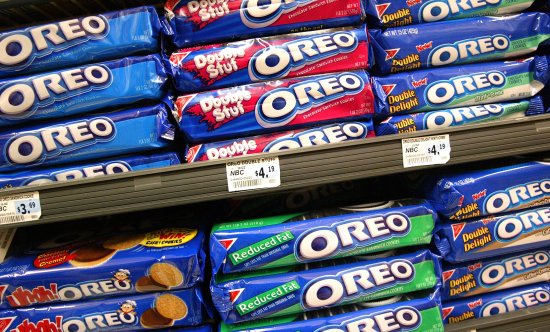 Have you ever wondered where the concept for Oreo cookies came from, or why they’ve reached an almost cult-like status? With more than 450 billion Oreo cookies sold since their inception in 1912, it’s safe to say they’ve earned the “America’s Favorite Cookie” moniker.

But, it’s not just the US who prefers to twist, lick, and dunk their cookies. Oreo cookies can be found in 100 countries worldwide and is the best-selling cookie brand of the 21st century. Pour yourself a glass of ice-cold milk and digest some “Wonderfilled” facts about this iconic sandwich cookie.

Where did that name come from?

The Oreo cookie has gone through some name changes over the past 105 years. When they were first introduced in 1912, they were known simply as the Oreo Biscuit (we’ll get to why a bit later). Then in 1921, the cookie embraced its shape and was renamed the Oreo Sandwich. In 1937, the name was changed again. This time they took a high-brow turn and assumed the name, Oreo Crème Sandwich. Well, they certainly sound fancier, right? The final name change (for now) came in 1974 when the cookie became known as the Oreo Chocolate Sandwich Cookie, Oreo for short.

The scattering of name changes isn’t the only inconsistency with the iconic brand. The rumors surrounding the actual name are also a jumble. According to a Time article, it’s possible the name Oreo came from “or” the French word for gold, and coincidentally the original package color. Thought Co also sheds some light on the naming process. They say “Oreo” is Greek for mountain, the original shape of the cookie, or that it’s as simple as combining “re” from cream and the two “os” in chocolate.

While Oreo cookies may have been the inspiration of other well-known sandwich cookies, like Joe Joe’s and Newman-O’s, the Oreo was actually not an original concept. In 1908, four years prior to the launch of Oreos, Sunshine Biscuits released a sandwich cookie called Hydrox. Unfortunately for Hydrox cookies, it got lost among the buying and selling of its parent companies, and the marketing genius of Oreos, leading them to disappear from store shelves. Now thanks to Leaf Brands, LLC, the Hydrox is back and are ready to defend their “America’s Original” title.

Have you ever looked closely at an Oreo? The seal has been the subject of a major debate. See the two-bar cross at the top? That’s said to be a Cross of Lorraine, a cross related to the Crusader’s cross, a symbol associated with Joan of Arc. However, Nabisco swears it’s just “an early European symbol for quality.”

And the flower-like pattern around the edges? It could be a symbol of the Knights Temples, or you can believe what most consumers see — a four-leaf clover.

What we do know is that a man named William Turnier worked at Nabisco at the time of the redesign, and while the company acknowledges he worked there, they simply refer to him as a design engineer. According to his son, Turnier’s father was a Mason, yet he was not, nor was he interested in “Masonic stuff.” The family does claim to have the original blueprints of the Oreo, though. We can keep on speculating but alas, the truth of the design may never be fully known.

There was a Mr. Oreo

Double Stuf, Thins, or Original, an Oreo wouldn’t be an Oreo if it wasn’t for the middle, am I right? But, when something like the Oreo has been around for so long, you forget there are actual people behind the concepts. That’s where food scientist Sam J. Porcello, aka “Mr. Oreo,” comes in.

Porcello invented the newer version of the delicious “creamy, pasty, stick-together filling” we can’t get enough of to this day. But that’s not all he did. According to a New York Daily News article, Porcello was not only one of the world’s foremost experts on cocoa, he also developed the extra indulgent chocolate and white chocolate-covered Oreo. Take a moment and give a thank you to “Mr. Oreo” for using his chocolaty powers for good.

Oreo was part of a trio of “high-class biscuits”

In 1912, alongside Mother Goose Biscuits and Veronese Biscuits, Oreo Biscuits made up the Biscuit Trio. The Trio was a variety of the highest-class biscuits available to consumers, a nod to the English biscuits served at teatime. The cookies were seen as an exciting innovation, and the executives at Nabisco were sure they had three surefire hits. They were one-third right. Oreos were the only cookie of the trio to survive. And with a description like this, “two beautifully embossed chocolate-flavored wafers with a rich cream filling,” how could they fail?

New flavors are all the rage, but an original flavor didn’t fare so well

It’s safe to say we’ve gotten to a point where it’s not if there’s going to be a new Oreo flavor, but when. And despite the sudden flavor influx of the good (Reese’s Peanut Butter Cup), the bad (watermelon), and the ugly (Swedish Fish, obvi), flavor experimenting is something Nabisco has been tinkering with since the beginning. Back in 1912 when the cookies first hit the shelves, the classic chocolate and vanilla pairing was sold alongside a lemon meringue cookie. That flavor was sadly discontinued in the 1920s, but there are currently golden wafer Lemon Oreo cookies if you have a hankering for a citrus sweet.

As with all mass-produced food, the perfect ratio of an Oreo cookie is down to an exact science. So, what about the Double Stuf Oreo? Double the filling? Not quite. According to calculations done by Dave Anderson, a math teacher who runs a blog called A Recursive Process, the Double Stuf is actually closer to 1.86x “stuf”. If you want to really eat a Double Stuf, just stack the creme side of two regular-sized Oreo together — and who hasn’t done that?

Are they or aren’t they (vegan, that is)

The original recipe for Oreo cookies contained lard (pork fat) which made them unsuitable for vegans — and they were most definitely not kosher. But, with the changing climate of the low-fat 1990s, Nabisco decided it was finally time to get rid of the lard and become kosher. It took more than three years to convert their equipment, and with the change brought an unexpected, yet welcoming, side effect — Oreo cookies were now vegan. Or are they? Spoon University initially claimed the cookie was vegan, but a deeper dive, as reported in this December 2016 article, shows that according to the Oreo UK website, there is the possibility of cross-contamination with milk. Milk aside, there’s another vegan debate brewing. A blog that focuses on abolitionist vegan education showed an email snippet from the company that the sugar in a batch of Oreo cookies may be refined with “bone char,” an animal-derived natural charcoal.

What does PETA have to say about the Oreo debate? According to their site of the Top 20 Accidentally Vegan Foods, Oreo ice cream cones and 100 Calorie Thin Crisps are listed, but the original cookie (and any varieties) are nowhere to be found.

If you ever find yourself in the Manhattan neighborhood of Chelsea, take a stroll down Oreo Way. The block formerly known as West 15th Street between 8th and 9th Avenues borders the old National Biscuit Company (Nabisco) factory building, now a must-visit culinary wonderland known as Chelsea Market. The Market celebrates its history and even the restaurants, like Creamline, embrace the iconic history by offering fried Oreos. BRB, heading to Chelsea.

I’m a complete sucker for limited edition food offerings. And back in 2012 when Oreo came out with Birthday Cake cookies, in original and golden, I was determined to try them before they vanished. The sprinkle-laden cookies were intended to be a limited edition offering for the brands 100th birthday, but over five years later they’re still around. I’m definitely not complaining, it’s like the cookie gods granted one big birthday wish for us all.

How many Oreo cookies are too many? In the middle of the 1980s, the answer was simple — just one Oreo. In 1984, Nabisco launched the Oreo Big Stuf. Individually wrapped, the “snack” was a whopping 316 calories and reviewers reportedly claimed it took around 20 minutes to eat.  For comparison, a single Oreo contains roughly 53 calories. The cookie was eventually phased out, but if you’re compelled to relive the devil-may-care attitude of the 1980s, with no chocolate-stained teeth to be found anywhere, you must watch the commercial. And yes, the music is a riff on Jean Knight’s “Mr. Big Stuff.”

How you eat an Oreo can say a lot about you. Do you twist and lick? Dunk and slurp? Spread a little peanut butter on them? A 2004 survey of over 2,000 Oreo eaters found that more men bit into their cookies while women were more likely to dunk. Want to know what your Oreo eating habits say about you? Randall Sleeth, a now retired associate professor of management from Virginia Commonwealth University created a tongue-in-cheek personality test based on your eating preference.

Oreo cookies have infiltrated the likes of pie crust, churros, and ice cream cones, not to mention the creation of an onslaught of “cookies and cream” products. Is it any wonder that the classic flavor has finally made its way into the beer aisle as well?

In January 2017, Virginia-based The Veil Brewing Company released a version of their chocolate milk stout, called Hornswoggler, that was infused with actual Oreo cookies. A photo from the Beer Street Journal Twitter page even shows the bits of filling in the stout. Unfortunately for all, this beer was sold out within a week. Fingers-crossed that next they’ll release a nice blonde ale using Golden Oreos but for now, one can only dream.