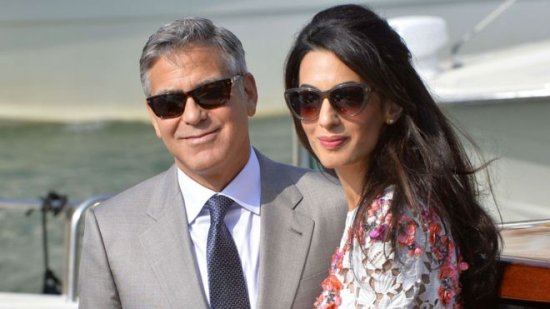 Amal Clooney has given birth to twins – a girl named Ella and a boy named Alexander.

They were born in London on Tuesday morning, the publicist of her actor husband George Clooney said.

“Ella, Alexander and Amal are all healthy, happy and doing fine,” Stan Rosenfield said before joking: “George is sedated and should recover in a few days.”

Amal Clooney’s parents said they were delighted to welcome their grandchildren.

“They are in great health, all is perfect,” Amal’s father Ramzi Alamuddin, who lives in Beirut, told AFP news agency.

“I am very happy for them, they will be great parents.”

Amal’s mother Baria, who is in hospital with her daughter, said: “We are over the moon. It was a beautiful delivery. The babies are beautiful and are doing well.”

Actress Nicole Kidman, speaking at the Glamour Women Of The Year awards in London, said: “Any time a baby is born, I’m like: ‘Ahhh’. So two babies it’s double ‘ahhh’. They have the most joyful journey ahead.”

Mia Farrow also added her best wishes, tweeting: “Wishing Ella and Alexander Clooney a warm welcome and every blessing – and congratulations to Amal and George!”

Comedian and TV host Ellen DeGeneres tweeted her best wishes with a reference to George Clooney’s Oceans Eleven film franchise: “Welcome to the world, Ella and Alexander Clooney. Congratulations, George and Amal, or as I’m now calling you, Ocean’s Four.”

Social media reaction has included comments about how “normal” the twins’ names are.

And another tweeted: “What, George and Amal Clooney gave their new twins nice normal names? Ella and Alexander. Isn’t that a violation of celebrity rules?”

The couple’s friend, actor Matt Damon, confirmed that Amal was pregnant with twins back in February.

He was speaking after the news of the pregnancy was reported by CBS’s The Talk host Julie Chen.

Explaining how Clooney revealed the news, Damon said: “I was working with him last fall and he pulled me aside on set and I almost started crying.

What to expect at Bill Cosby sex assault trial