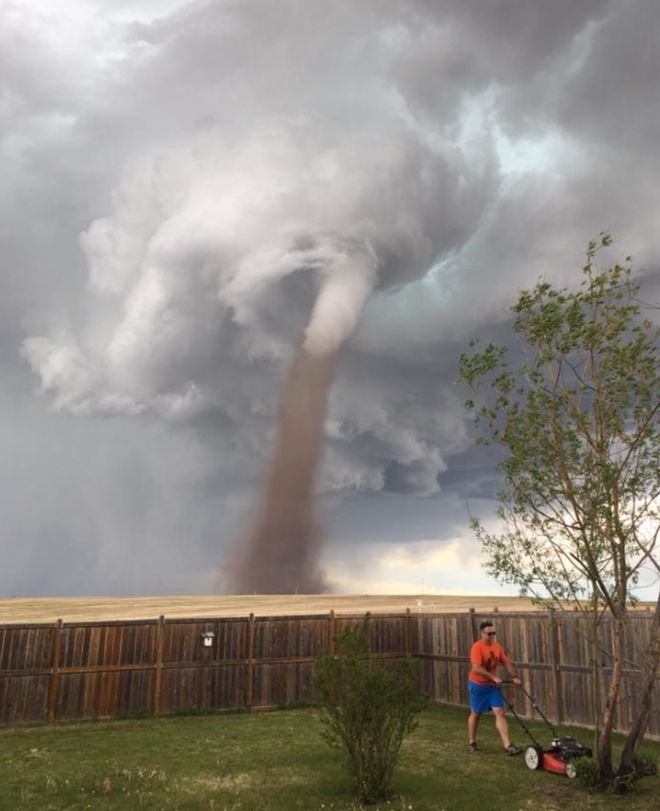 A picture of a man in Canada calmly mowing his lawn with a menacing tornado swirling in the background has gone viral on social media.

Theunis Wessels was “fully aware” of the twister but “wasn’t worried at all”, his wife Cecilia, who took the photo, told the BBC.

She said the tornado was about 2km (1.25 miles) from their house in Three Hills, Alberta – much further away than it appeared in the photo.

The storm was quickly gone, she added.

Mrs Wessels told the BBC she was sleeping in the house on Friday – but then was woken by her nine-year-old daughter who was concerned that her father would not abandon his lawn-mowing and hide inside from the tornado.

“My daughter was the most upset, saying ‘Mum, what we gonna do?'”

Mrs Wessels came outside to check on her husband, who continued mowing.

He said “Everything is OK,” and he looked “calm, in control,” she recollected.

She added that he had some knowledge about twisters as he had recently attended a seminar organised by a storm-chasing association.

Many town residents were taking pictures of the tornado, and Mrs Wessels decided to post hers on Facebook and also sent them to her mother in South Africa.

She said her mother was very worried about her son-in-law, asking: “Why are you letting him outside? Please stay safe.”

Very soon the picture began causing a storm on the social media.

One user wrote: “This is the craziest picture! Lol. I’m glad that the tornado didn’t come down on your house!”, while another described Mrs Wessels’ husband as “the Chuck Norris of lawn mowers!”

Mrs Wessels said her photo had already been shared 3,500 times in two days, and she had received 256 friend requests.

She said Friday’s tornado was moving east – away from the house, and was gone in less than five minutes.

It caused no injuries in the town, and only minor structural damage was reported.

Local authorities only issued a tornado warning after she had posted her pictures, Mrs Wessels said.

Outrage after rapist jailed with victim