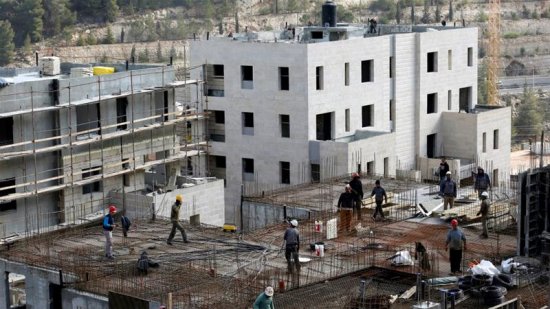 Israel is expected to approve nearly 2,500 new settlement housing units across the occupied West Bank next week after the projects were tabled at a planning council meeting on Friday.

Israeli NGO Peace Now said on Friday that Israel’s Civil Administration – the military body governing the occupied West Bank – was scheduled to meet on Tuesday and Wednesday to discuss 27 separate plans for settlement housing units across the West Bank.

According to local media reports, about 1,500 of the housing units set to be approved are in major settlement blocs including Maaleh Adumim and Ariel, which Israel wants and expects to annex in any potential peace deal.

One of the items on the agenda will allegedly pave the way for the construction of 102 housing units in Amichai, the first new settlement to be officially created by the government in 25 years.

The rest lie outside the blocs and deep within the West Bank, including the Beit El settlement, northeast of Ramallah, and the Susiya settlement in the South Hebron hills.

The deal comes on the heals of US President Donald Trump’s visit to Israel and the occupied Palestinian territories.

The Palestinians and the majority of the international community view settlements as unlawful and a major obstacle to a two-state solution, as they are built on land that the Palestinians want for a future state.

When Benjamin Netanyahu, Israel’s prime minister, visited Trump in Washington DC in February, the US president publicly urged Netanyahu to hold back on settlement building in order to improve the prospects for the possibility of US-brokered peace negotiations between Israel and the Palestinians.

June marks 50 years since Israel conquered and occupied East Jerusalem, the West Bank and the Gaza Strip in the June 1967 war. The Israeli victory was followed by the spread of Jewish settlements throughout the occupied territories.

Although Israel unilaterally withdrew from Gaza in 2005, currently more than half a million Jewish settlers reside across the West Bank and East Jerusalem.

According to a new report published by the European Council on Foreign Relations, both the length and characteristics of Israel’s 50-year occupation of Palestinian territory show that it has no serious plans to relinquish the territory and is moving towards annexation instead.

Authored by Valentina Azarova, a postdoctoral fellow at the Centre for Global Public Law, Koc University in Turkey’s Istanbul, the report addresses the failure of using the framework of international humanitarian law (IHL) and international human rights law (IHRL) to assess Israeli policies in the occupied territories.

“Attempts by third states and international actors to enforce IHL and IHRL have failed to bring about Israel’s compliance because this partial legal framework neither adequately captures the legal consequences of continued occupation with the aim of acquiring the territory, nor generates appropriate remedial action for such a situation,” the report said.

Hugh Lovatt, Israel-Palestine Project Coordinator at ECFR, told Al Jazeera that the use of IHL and IHRL does not fully take into account Israeli policy in the occupied territory, including moves to annex areas.

“In a situation in which the intent of Israel’s continued control over the OPT is one of the territorial acquisition, which is revealed through the use of an integrated legal framework, then third-party actors such as the EU and its members states are under an obligation to act collectively to bring to an end Israel’s occupation. This requires a new approach to peace making in Israel/Palestine,” he said, using OPT to refer to the occupied Palestinian territories.

“This means placing greater emphasis on bringing about Israel’s withdrawal, rather than conditioning this on political compromise between the two sides.”

The ECFR report also called on the European Union, other third party states, and international actors to recognise Israel’s prolonged occupation of Palestinian territory as unlawful, and to review their dealings both with Israel and Israeli entities in accordance with their obligations under international law.

In its bilateral relations with Israel, the European Union has in recent years adopted a policy of “differentiation” in an attempt to exclude settlement-linked entities.

“At a minimum the EU must continue to advance its measures to differentiate between Israel and its settlements, in order to ensure the full and effective non-recognition of Israel’s unlawful practices in the OPT, including its settlement activity,” Lovatt told Al Jazeera.

“Of particular focus should be dealings by EU corporations in relation to settlement entities and activities.”