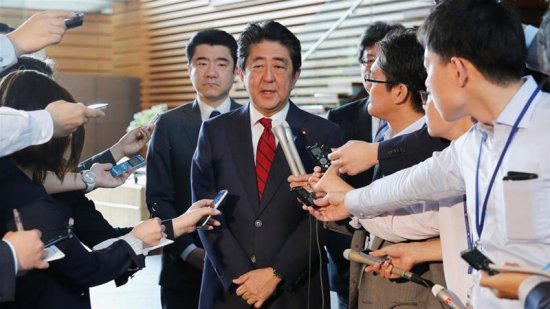 On Monday, North Korea test-fired a Scud missile into Japanese waters, the third test in as many weeks and the 12th this year – carried out in defiance of UN sanctions warnings and US threats of possible military action.

“We will never tolerate North Korea’s continued provocations that ignore repeated warnings by the international community,” Abe told reporters shortly after the test.

“As agreed during the G7 summit, the North Korean problem is the international community’s top priority. In order to deter North Korea, we will take concrete action with the United States.”

Isolated but nuclear-armed, North Korea has test-fired a missile almost every week for the past three weeks.

The latest, a short-range Scud, flew about 450km before landing in the Sea of Japan (East Sea) between the Korean Peninsula and Japan, the US Pacific Command said.

Monday’s test also marked the second time this year that a North Korean missile fell close to its neighbour Japan.

Michael Penn, president of the Tokyo-based Shingetsu news agency, told Al Jazeera that the latest test was part of a North Korean effort to strengthen its military against any possible threats from the US.

“The missile technology tests themselves do seem to be the priority of the North Korean regime, to get their technology as strong as possible, as quickly as possible.

“They feel this is their best way forward – to show their own ability to defend themselves against a Trump administration they cannot predict,” Penn said.