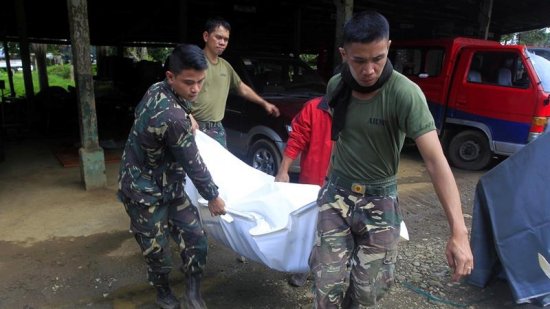 Fighters locked in street-to-street battles with security forces in a southern Philippine city on Mindanao island have killed 19 civilians, the military said on Sunday, bringing the official death toll from nearly a week of fighting to nearly 100.

The violence prompted President Rodrigo Duterte to declare martial law on Tuesday across the southern third of the Philippines to quell what he said was a fast-growing threat of “militants” linked to the Islamic State of Iraq and the Levant (ISIL, also known as ISIS) group.

Security forces are attempting to flush out rebels of the Maute and Abu Sayyaf armed groups, which have declared allegiance to ISIL.

Authorities said the fighters had killed 19 civilians in Marawi, a mostly Muslim-populated city of 200,000 people.

These included eight men believed to have been killed early on Sunday morning and then thrown into a ravine along a highway, just 200 metres away from a military checkpoint in the city, police said.

The dead, most of them shot in the head and some with hands tied behind their backs, were labourers who were stopped by the fighters while trying to flee clashes. At least one body had cardboard on the chest with the word “monafiq”, which means traitor.

Troops also recovered the bodies of three women, four men and one child near a state university in Marawi on Saturday, Brigadier General Restituto Padilla said.

“These are civilians, women. These terrorists are anti-people. We found their bodies while conducting rescue operations [on Saturday],” regional military spokesman Lieutenant Colonel Jo-ar Herrera told the AFP news agency.

The two other victims were employees of a state-run hospital seized by the fighters on the first day of the violence, police said.

Thousands of the city’s residents have fled because of the fighting, which has seen the military heavily bomb residential areas where the fighters were believed to be hiding.

The military announced on Saturday, the start of the holy month of Ramadan, that it would intensify the bombing campaign.

More than 2,200 people are estimated to be trapped in the conflict zone in Marawi, fearing for their lives from threats of fighters and military air raids.

Residents have been sending appeal for help via text messages, but rescue teams have not been able to penetrate the districts where they are located, said Zia Alonto Adiong, spokesman for the local province of Lanao Del Sur.

“The number is still continuing to rise,” Adiong told the DPA news agency. “They are asking for help to extract them or send relief goods.”

The violence began when dozens of gunmen went on a rampage throughout Marawi after security forces attempted to arrest Isnilon Hapilon, a veteran Filipino fighter regarded as the local leader of ISIL.

The gunmen planted black ISIL flags, took a priest and up to 14 other people hostage from a church, and set fire to buildings.

At least 61 fighters were killed and 15 security forces as of Saturday, according to the army.

“In as much as we would like to avoid collateral damage, these rebels are forcing the hand of government by hiding and holding out inside private homes, government buildings and other facilities,” military spokesman Brigadier-General Restituto Padilla said.

“Their refusal to surrender is holding the city captive. Hence, it is now increasingly becoming necessary to use more surgical airstrikes to clear the city and to bring this rebellion to a quicker end.”

Duterte and military chiefs have said most of the fighters belong to the local Maute group, which they estimate has about 260 armed followers.

But Duterte has said local criminals are backing the Maute in Marawi.