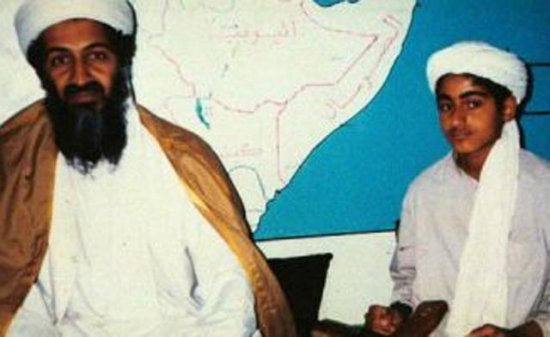 The voice is that of a soft-spoken 28-year-old, but the message is vintage Osama bin Laden, giving orders to kill. When the audio recording began turning up on jihadist websites two weeks ago, it was as if the dead terrorist was channeling himself through his favorite son.

“Prepare diligently to inflict crippling losses on those who have disbelieved,” Hamza bin Laden, scion of the Sept. 11, 2001, mastermind, says in a thin baritone that eerily echoes his father. “Follow in the footsteps of martyrdom-seekers before you.”

The recording, first aired May 13, is one in a string of recent pronouncements by the man who many terrorism experts regard as the crown prince of al-Qaeda’s global network. Posted just two weeks before Monday’s suicide bombing in Manchester, England, the message includes a specific call for attacks on European and North American cities to avenge the deaths of Syrian children killed in airstrikes.

The recording provides fresh evidence of ominous changes underway within the embattled organization that declared war against the West nearly two decades ago, according to U.S., European and Middle Eastern intelligence officials and terrorism experts. Decimated by U.S. military strikes and overshadowed for years by its terrorist rival, the Islamic State, al-Qaeda appears to be signaling the start of a violent new chapter in the group’s history, led by a new bin Laden — one who has vowed to seek revenge for his father’s death.

Encouraged by the Islamic State’s setbacks in Iraq and Syria, al-Qaeda is making a play for the allegiance of the Islamic State’s disaffected followers as well as legions of sympathizers around the world, analysts say. The promotion of a youthful figurehead with an iconic family name appears to be a key element in a rebranding effort that includes a shift to Islamic State-style terrorist attacks against adversaries across the Middle East, Europe and North America.

“Al-Qaeda is trying to use the moment — [with] Daesh being under attack — to offer jihadists a new alternative,” said a Middle Eastern security official, speaking on the condition of anonymity to discuss counterterrorism assessments and using the Arabic acronym for the Islamic State. “And what could be more effective than a bin Laden?”

Hamza bin Laden is hardly new to the Islamist militant world. His coronation as a terrorist figurehead has been underway since at least 2015, when longtime al-Qaeda leader Ayman al-Zawahiri introduced him in a video message as a “lion from the den” of bin Laden’s terrorist network. But in recent months, he has been promoted as a rising star on pro-al-Qaeda websites, with audio recordings from him urging followers to carry out attacks or commenting on current events. Longtime terrorism analysts say the promotion of Hamza bin Laden appears calculated to appeal to young Islamist militants who still admire Osama bin Laden but see al-Qaeda as outdated or irrelevant.

“Hamza is the most charismatic and potent individual in the next generation of jihadis simply because of his lineage and history,” said Bruce Riedel, who spent 30 years in the CIA and is now director of the Brookings Institution’s Intelligence Project. “At a time when Zawahiri and al-Baghdadi seem to be fading, Hamza is the heir apparent.” Abu Bakr al-Baghdadi is the Islamic State’s leader.

But Hamza bin Laden is not advocating his father’s style of jihad. Osama bin Laden was notorious for his ambitious, carefully planned terrorist operations, directed by al-Qaeda’s generals and aimed at strategic targets. His son, by contrast, urges followers to seize any opportunity to strike at Jewish interests, Americans, Europeans and pro-Western Muslims, using whatever weapon happens to be available.

“It is not necessary that it should be a military tool,” he says in the May 13 recording. “If you are able to pick a firearm, well and good; if not, the options are many.”

Strikingly, for a man who aspires to be the jihadist world’s next rock star, Hamza bin Laden insists on keeping most of his personal details hidden from public view. Even his face.

No confirmed photographs exist of the young terrorist since his boyhood, when he was portrayed multiple times as an adoring son posing with his famous father. He is believed to be married, with at least two children, and he lived for a time in the tribal region of northwestern Pakistan, although his whereabouts are unknown.

His refusal to allow his image to be published may reflect a well-founded concern about his personal safety, but it complicates the militants’ task of making him a terrorist icon, said Steven Stalinsky, executive director of the Middle East Media Research Institute, a Washington-based nonprofit organization that monitors Islamist militancy on social media.

“People loyal to al-Qaeda and against the Islamic State are looking for inspiration, and they realize that he can provide it,” Stalinsky said. “But for today’s youth, you need more than audio and an old photograph.”

What is known about Hamza bin Laden comes from his numerous recordings as well as intelligence reports and scores of documents seized during the 2011 raid by U.S. Navy SEALS on Osama bin Laden’s safe house in Abbottabad, Pakistan. Included in the document trove were personal letters from Hamza to his father, as well as written instructions from the elder bin Laden to his aides on how Hamza was to be educated and provided for.

The documents reveal a special bond between Hamza bin Laden and his father that persisted despite long periods of separation. The 15th of Osama bin Laden’s estimated 20 children, Hamza was the only son born to the terrorist’s third wife, and by some accounts his favorite, Khairiah Sabar, a Saudi woman whose family traces its lineage to the prophet Muhammad.

He spent his early childhood years with his parents, first in Saudi Arabia and later in Sudan and Afghanistan, where his father began to assemble the pieces of his worldwide terrorism network. A family friend who knew Hamza bin Laden as a child said he showed both promise and early flashes of ambition.

“He was a very intelligent and smart boy, very fond of horseback riding, like his father,” said the friend, a longtime associate of the al-Qaeda network, contacted through a social-media chat service. “While his parents wanted him to stay away from battlefields, he had arguments with them about it.”

Then came the 9/11 attacks, which brought the bin Ladens international notoriety and made Hamza’s father the world’s most wanted man. As U.S.-backed Afghan militias closed in on al-Qaeda’s mountain redoubt at Tora Bora in eastern Afghanistan, Osama bin Laden dispatched several of his wives and children to Iran, believing that the Islamic republic’s leaders could offer protection from U.S. airstrikes.

Hamza rarely, if ever, saw his father after that. He was still in Iran in his early 20s, living under a kind of house arrest, when he wrote a long missive to his father complaining about his life “behind iron bars” and expressing a longing to join his father as a mujahid, or holy warrior, in his fight against the West, according to a copy of the letter found in bin Laden’s safe house.

“What truly makes me sad,” he wrote in 2009, “is the mujahideen legions have marched and I have not joined them.”

Iran allowed the bin Laden clan to leave the country the following year, and by the time of the 2011 Navy SEAL raid, Hamza’s mother and other family members were living at the elder terrorist’s Pakistan hideout. Notably absent from the Abbottabad compound was Hamza. On Osama bin Laden’s orders, aides had kept him in a separate hideout with the intention of sending him to Qatar to be educated, according to U.S. and Pakistani counterterrorism officials. Already, the patriarch was beginning to see his son as a future al-Qaeda leader, judging from the letters he wrote to his aides shortly before his death.

“Hamza is one of the mujahideen, and he bears their thoughts and worries,” Osama bin Laden wrote in one such letter. “And at the same time, he can interact with the [Muslim] nation.”

Hamza bin Laden’s sense of personal destiny only deepened with the death of his father and half brother Khalid at the hands of U.S. commandos.

By 2015, when Zawahiri introduced Hamza to the world as an al-Qaeda “lion,” the then-26-year-old already had the voice of a veteran Islamist militant, urging followers in an audio recording to inflict the “highest number of painful attacks” on Western cities, from Washington to Paris.

A year later, he delivered a more personal message intended as a tribute to his dead father. Titled “We are all Osama,” the 21-minute spoken essay included a vow for vengeance.

“If you think that the crime you perpetrated in Abbottabad has gone by with no reckoning, you are wrong,” he said. “Yours will be a harsh reckoning. We are a nation that does not rest over injustice.”

Terrorism analysts have noted several recurring themes in Hamza bin Laden’s audio postings that distinguish his Islamist militant philosophy from the views expressed by both his father and putative al-Qaeda leader Zawahiri. One difference: Unlike Zawahiri, Hamza bin Laden has eschewed overt criticism of the Islamic State, perhaps to avoid antagonizing any followers of that terrorist group who might be inclined to shift to al-Qaeda.

The bin Laden family friend suggested that the omission is deliberate, part of an effort to position Hamza bin Laden as a unifying figure for Islamist militants. The associate, who spoke on the condition of anonymity to comment freely, noted that Hamza bin Laden enjoys multiple advantages in this regard, as he can claim to be both a descendant of the prophet and a son of jihadist royalty.

“The calculation is that it will be very difficult for the Daesh leadership to denounce Hamza, given who he is,” the family friend said.

The other distinction is Hamza bin Laden’s persistent calls for self-directed, lone-wolf attacks against a wide array of targets. Here, he appears to be borrowing directly from the playbook of the Islamic State, which has fostered a kind of Everyman’s jihad that does not depend on instructions or permission from higher-ups. His Internet postings have lauded Army psychiatrist and convicted Fort Hood shooter Nidal Hasan, who murdered 13 people in a rampage on the base in Texas in 2009, and the two Britons of Ni­ger­ian descent who hacked British soldier Lee Rigby to death on a street outside his London barracks in 2013.

None of those assailants were known al-Qaeda members. Yet, by applauding such attacks, Hamza bin Laden appears to associate himself with a more aggressive style of terrorism that appeals to young Islamist militants, analysts and experts said. Such messages also convey an impression of a terrorist network that, while battered, is far from defeated, said Bruce Hoffman, a former U.S. adviser on counterterrorism and director of Georgetown University’s Center for Security Studies.

“He brings assurance that, even though al-Qaeda has been hammered in recent years, it’s still in good hands, with a junior bin Laden who is ideally situated to carry on the struggle,” Hoffman said. “Since a very young age, Hamza bin Laden wanted to follow in his father’s footsteps. And from al-Qaeda’s perspective, now is the critical time for him to come of age and assume the reins of authority.”