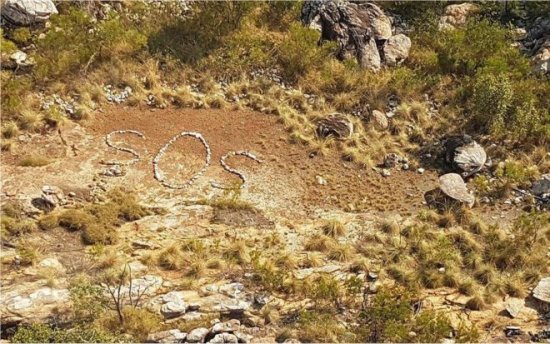 An SOS signal made of rocks in a remote part of Western Australia has prompted fears that someone, or more than one person, could be missing.

The distress signal was spotted by a helicopter pilot. It led to a ground search by police who had to reach the area by air because of tough terrain.

Authorities have now appealed for public help after failing to find “any indication of recent human activity”.

However, police said they had discovered the remains of a campsite at the scene, which is at Swift Bay about 500km (300 miles) from the city of Broome.

“Police are trying to establish if there are any missing persons in the area who require assistance,” they said in a statement.

Senior Sgt Peter Reeves told the Australian Broadcasting Corp that the message may have been there for years.

“There are indications that there may have been someone camped there at one point in time, but it is just not clear how long ago that was,” he said.