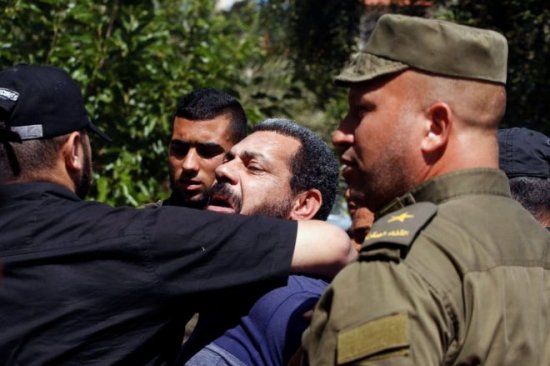 Three men accused over the killing of a leader of the Palestinian Islamist group Hamas have been put to death by the group in the Gaza Strip.

One was accused of killing Mazen Fuqaha while the other two were accused of involvement. All three were said to have collaborated with Israel.

Two were hanged while the third was killed by a firing squad in front of hundreds of witnesses.

Hamas has controlled the Gaza Strip since ejecting a rival Palestinian faction, Fatah, from power nearly 10 years ago.

Hamas was shocked when Fuqaha was shot dead near his house in March, and imposed tight border restrictions on Palestinians trying to leave Gaza.

Human rights groups had called on the Islamist movement not to carry out the executions – just two weeks after it announced the arrests and aired videos of what it said were the men’s confessions.

Since Hamas took over Gaza, it is believed to have executed some 28 people.

One of those killed on Thursday, Ashraf Abu Leila, 38, was named as the assassin and hanged, AFP news agency reports.

Abdallah al-Nashar, 38, and Hisham al-Aloul, 42, were convicted of being his accomplices and “collaborating with the Zionist enemy”.

Mr Nashar was shot instead of being hanged because he had once been an officer in the Palestinian presidential guard, AFP reports.

Sarah Leah Whitson, executive director of the Middle East division of Human Rights Watch, said: “Rushing to put men to death based on an unreviewable decision of a special military court days after announcing their arrests, and airing videoed confessions, smacks of militia rule, not the rule of law.

“Reliance on confessions, in a system where coercion, torture and deprivation of detainee’s rights are prevalent, and other apparent due process violations further taint the court’s verdicts.

“Death as government-sanctioned punishment is inherently cruel and always wrong, no matter the circumstance.”

Israel occupied the Gaza Strip during the 1967 Middle East war. In 2005, it withdrew its troops and some 7,000 settlers.

In 2006, Hamas won Palestinian Legislative Council elections. It took control of Gaza the following year after a violent rift with the Fatah faction of Palestinian Authority President Mahmoud Abbas.

Hamas as a whole, or in some cases its military wing, is designated a terrorist group by Israel, the US, EU, and UK, as well as other powers.