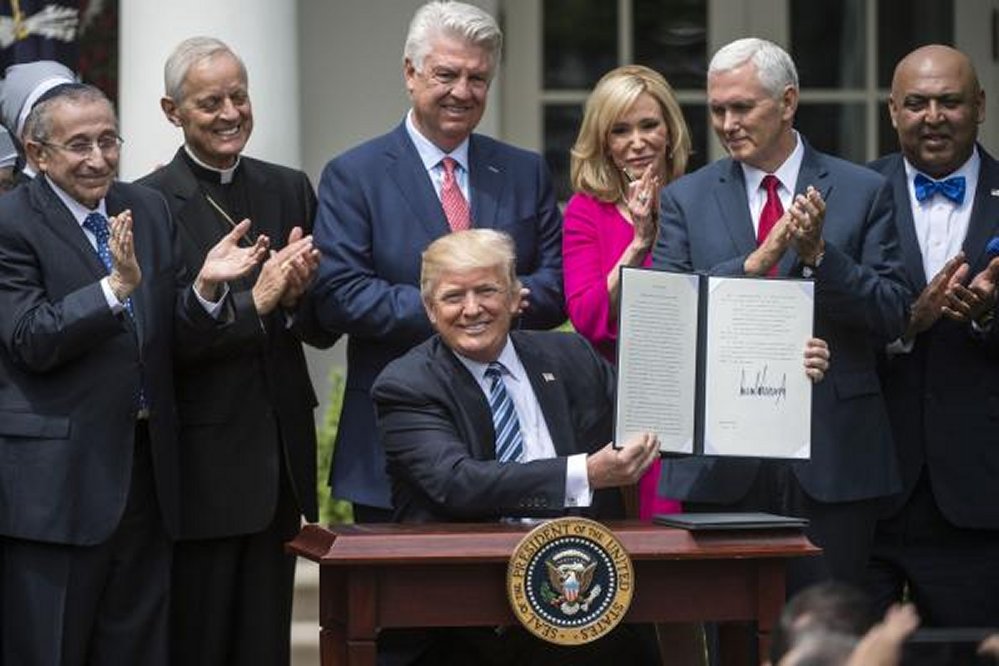 US President Donald Trump is visiting Israel and the Palestinian territories, as he continues his first foreign trip.

He flies in from Saudi Arabia, a key US ally, where he gave a speech to Arab and Muslim leaders at a summit.

Mr Trump will hold talks with both Israeli and Palestinian leaders during the course of his two-day stop.

The president has called an Israeli-Palestinian peace agreement “the ultimate deal”, but has been vague about what form it should take.

He has said he prefers to leave it to both sides to decide between them in direct talks.

At a summit in Riyadh on Sunday, Mr Trump called on Arab and Muslim leaders to take the lead in combating Islamist militants, urging them to “drive them out of this earth”.

He singled out Iran, saying it had “fuelled the fires of sectarian conflict and terror” in the region for decades.

Iran’s Foreign Minister Mohammad Javad Zarif later hit back on Twitter, suggesting the US was milking Saudi Arabia for billions of dollars in newly-signed arms deals.

In his speech, Mr Trump also stated again that he believed peace between Israelis and Palestinians was possible.

The US president has been widely seen as considerably more supportive of Israel than his predecessor, Barack Obama. He has taken a softer position on the contentious issue of Israeli settlements, suggesting that their expansion rather than their existence might hamper the search for peace.

More than 600,000 Jews live in about 140 settlements built since Israel’s 1967 occupation of the West Bank and East Jerusalem, land Palestinians claim for a future state. The settlements are considered illegal under international law, though Israel disputes this.

The president has also sent mixed signals on the issue of Jerusalem, pledging to move the US embassy there from Tel Aviv, angering Palestinians and delighting Israelis.

However he has since stalled, with Secretary of State Rex Tillerson recently telling NBC News that Mr Trump was weighing it up.

Israel regards the whole of Jerusalem as its capital, while the Palestinians claim the east as their capital. The international community does not recognise Israeli sovereignty over Jerusalem and maintain their embassies in Tel Aviv.

There has been some consternation in Israel in the run-up to Mr Trump’s trip over remarks made by administration officials.

Israeli Prime Minister Benjamin Netanyahu rejected Mr Tillerson’s suggestion that moving the embassy might harm the peace process, while a US Consulate official caused outrage by saying the Western Wall, one of Judaism’s holiest sites, was “not in your [Israel’s] territory but part of the West Bank”.

The White House later said the official’s comments “do not represent the position of the United States”.

Mr Trump’s trip also comes days after it was reported that the president had leaked to Russia’s foreign minister classified intelligence information said to have come from an Israeli source. The incident has raised questions about the confidentiality of secret intelligence passed to the US by its closest Middle Eastern ally.

A huge security operation is under way for Mr Trump’s visit, during which he will hold separate meetings with Mr Netanyahu in Jerusalem on Monday and Palestinian leader Mahmoud Abbas in Bethlehem the following day.

The agenda for the rest of Mr Trump’s trip

Mr Trump’s eight-day trip will also take in Brussels, the Vatican, and Sicily.

The president’s visit has been overshadowed by his political difficulties at home, namely the fallout over his sacking of FBI chief James Comey.

Related Topics:Donald TrumpIsraelU.S
Up Next