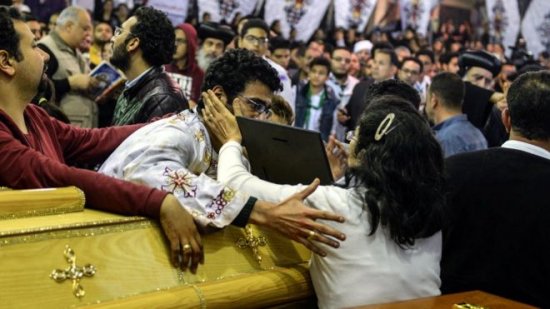 Egypt’s public prosecutor says 48 suspected members of so-called Islamic State (IS) have been referred to a military court in connection with three bombings of Coptic churches.

Thirty-one of the suspects are in custody while the others are still at large.

More than 70 people died in suicide attacks against churches in Cairo in December and in the cities of Tanta and Alexandria in April.

IS said it carried out the bombings.

In a statement on Sunday, public prosecutor Nabil Sadek said some of the suspects were leaders within IS and had formed cells in Cairo and the southern province of Qena to carry out the church attacks.

He said the militants were also responsible for killing eight police officers at a checkpoint in Egypt’s Western Desert in January.

The attack in December killed 29 people at Saint Peter and Saint Paul Church in central Cairo, close to the headquarters of Coptic Pope Tawadros II.

IS has threatened more attacks on Egypt’s Coptic Christians, who make up 10% of the population.

Egypt’s President Abdul Fattah al-Sisi announced a three-month state of emergency after the attacks in April.

Libya Benghazi: Group blamed for 2012 attack on US mission disbands