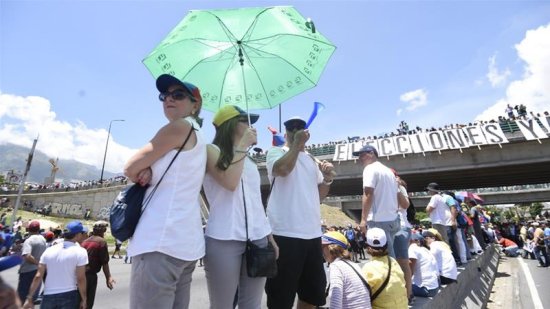 Venezuelan protesters have taken to the streets to mark 50 days since the start of demonstrations against President Nicolas Maduro as a deadly political crisis plays out in a divided country on the verge of paralysis.

Freddy Guevara, vice president of the opposition-majority National Assembly, said on Saturday that the protest camp was “stronger than ever”.

“After 50 days of resistance, of deaths and arrests, we are stronger than ever, and we will not give up,” he said.

At least 47 people have been killed, hundreds injured and 2,200 detained in the seven weeks of demonstrations.

Al Jazeera’s John Holman, reporting from Cucuta on the Colombia-Venezuela border, said the government was responding to the growing pressure by “doubling down”.

“Opposition leader Henrique Capriles was trying to leave the country the other day to go to New York City to talk to the UN and he says the authorities took away his passport,” he said.

“President Maduro has also extended the state of emergency that had been in effect for over a year now. That means he doesn’t really have to listen to the opposition-controlled Congress and get his decrees issued as he sees fit.”

The opposition has complained of “savage repression” by the government, which in turn accuses them of “terrorist” tactics in service of a US-funded coup attempt.

But Maduro has his supporters, too. On Saturday, food workers who back his controversial plan for a pro-government constitutional assembly will march to the Miraflores presidential palace, where the president will receive them.

Venezuela is bitterly divided, as locals bridle under chronic shortages of food and medicine, soaring inflation rates – prices could rise by 720 percent this year, the IMF estimates – and some of the world’s highest crime rates.