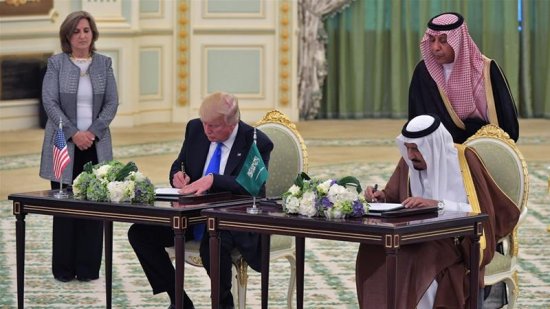 The US and Saudi Arabia signed arms deals worth almost $110bn on Saturday, the first day of U.S. President Donald Trump’s visit to the traditional US ally.

US Secretary of State Rex Tillerson said that the arms agreements will help Saudi Arabia deal with “malign Iranian influence”.

“The package of defence equipment and services supports the long-term security of Saudi Arabia and the entire Gulf region,” Tillerson told reporters in Riyadh on Saturday.

This is “in particular in the face of malign Iranian influence and Iranian-related threats which exist on Saudi Arabia’s borders on all sides,” Tillerson said.

Al Jazeera’s James Bays, reporting from Riyadh, said that the arms deal would be seen by both signatories as a “win-win”, especially as the deal involved arms that Obama was not prepared to sell to Saudi Arabia, including missile defence systems.

“I think this is what both sides are trying to project here: a successful meeting and the US relationship with Saudi Arabia returning to the way it was before President Obama,” said Bays.

“Because certainly the White House says that it feels President Obama ‘abandoned’ Saudi Arabia and this region, and they want the whole world to know that now they are getting things ‘back on track’.”

The Saudi foreign minister Adel al-Jubeir said in the joint press conference with his counterpart Rex Tillerson that the two countries had signed a “joint strategic vision declaration” and hailed the talks as a “truly historic day in the relationship between the Kingdom of Saudi Arabia and the United States, and we believe the beginning of a turning point in the relationship between the United States and the Arab and Islamic world.”

The arms agreements are part of a series of wider trade deals. Al-Jubeir said “the total value of those investments is in excess of $380bn,” and claimed the deals would lead to the creation of hundreds of thousands of jobs in the US and Saudi Arabia.

US conglomerate General Electric announced earlier on Saturday that it had also signed agreements and memorandums of understanding worth $15bn.

The deal came at the start of Trump’s eight-day foreign tour that will also take him to Jerusalem, the Vatican and meetings with leaders in Europe.

The president and first lady Melania Trump were welcomed by Saudi King Salman as they disembarked at King Khalid International Airport in Riyadh on Saturday morning.

After a welcoming coffee ceremony, Trump and his entourage were brought to the royal court where the president was awarded the Collar of Abdulaziz Al Saud, Saudi Arabia’s highest civilian honour.

Trump held talks with King Salman and was to meet the kingdom’s two crown princes on Saturday, before giving a speech on Islam to leaders of Muslim countries on Sunday.

For Riyadh the visit is an opportunity to rebuild ties with a key ally, strained under Trump’s predecessor Barack Obama who Sunni Arab Gulf states suspected of a tilt towards their Shiite regional rival Iran.

Trump’s speech on Sunday to dozens of Muslim leaders has been touted as a major event – along the lines of a landmark address to the Islamic world given by Obama in Cairo in 2009.

The speech will be especially sensitive given tensions sparked by the Trump administration’s attempted travel ban targeting several Muslim-majority nations and accusations of anti-Islamic rhetoric on the campaign trail.

The next leg of Trump’s trip will be Israel. After meeting Israeli Prime Minister Benjamin Netanyahu in Jerusalem, Trump will see Palestinian president Mahmoud Abbas in Bethlehem, part of his efforts to revive the long-stagnant peace process.

On Tuesday Trump heads to Rome to meet with Pope Francis. The two men are at odds on everything from climate change to refugee policy, although the pontiff says he will give the US leader an open-minded hearing.

The president will then meet NATO members in Brussels and attend a G7 summit in the Sicilian town of Taormina.