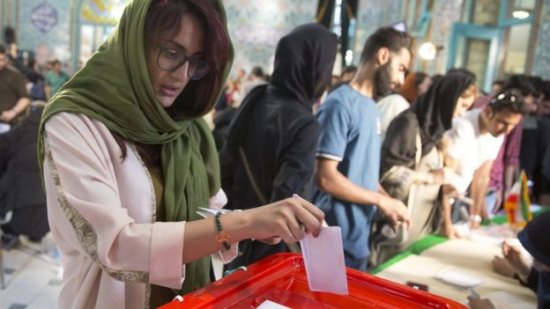 After avoiding a run-off with a 57% outright victory over his main rival, Mr Rouhani said he respected the opponents’ right to criticise him.

The decisive victory gives him a strong mandate to seek reforms and revive the country’s ailing economy, analysts say.

“The Iranian nation has chosen the path of interaction with the world, a path which is distant from extremism and violence,” Mr Rouhani said in first speech after the victory, broadcast on state television.

“The election is now over. I am the president of the nation and need assistance from every single Iranian, even those who oppose me and my policies.”

Turnout in the election was unexpectedly high, at around 70%.

And this is thought to have helped Mr Rouhani, who received close to 23 million votes out of the 40 million that were cast.

His main challenger, former prosecutor Ebrahim Raisi received 38.5%, or 15.7 million votes, not enough to take the election to a second round.

Mr Khamenei said Iran would demonstrate “national dignity” and “wisdom” in relations with other countries. But he did not congratulate Mr Rouhani for his victory.

There were celebrations in the capital, Tehran, with young people singing and dancing the central Vali Asr Square, despite efforts by police to move them, AFP news agency reported.

The economy seems to be the number one issue.

Average Iranians say they do not feel the economic benefits after international sanctions were lifted as a result of a nuclear deal signed between Iran, the US and other countries in 2015.

While oil exports have rebounded and inflation is back at single-digits, unemployment remains high, especially among the young people.

Mr Rouhani also promised a moderate vision and an outward-looking Iran and, at rallies, openly attacked the conservative-dominated judiciary and security services.

But Mr Rouhani’s own powers are limited by those of Ayatollah Khamenei, who has the last say on many crucial and strategic issues.

Another challenge, experts say, comes from abroad, and the relations with the new US government under President Donald Trump.

Mr Trump opposes the nuclear deal which eased sanctions on the Middle Eastern country, and has called it “worst deal ever”.

But, despite the objections, his White House renewed the agreement earlier this week.

The results were announced as Mr Trump arrived in Saudi Arabia, Iran’s biggest regional rival, for his first foreign trip as president.

In Riyadh, US Secretary of State, Rex Tillerson, said he hoped Mr Rouhani would use his new term to “dismantle a network of terrorism and end ballistic missile programme”.

But Iran denies any involvement in terrorism and says its missile programme, which has recently been targeted by Mr Trump with new sanctions, does not breach UN resolutions.

Saudi Foreign Minister Adel al-Jubeir described the election as a “domestic matter”, and said Iran was meddling in Arab countries and providing support for the extremist group Al-Qaeda.

Meanwhile, the EU foreign policy chief, Federica Mogherini, congratulated Mr Rouhani for the “strong mandate received” and that Europe was ready to work for better “engagement” and “regional peace”.

US and Saudi Arabia sign arms deals worth almost $110bn