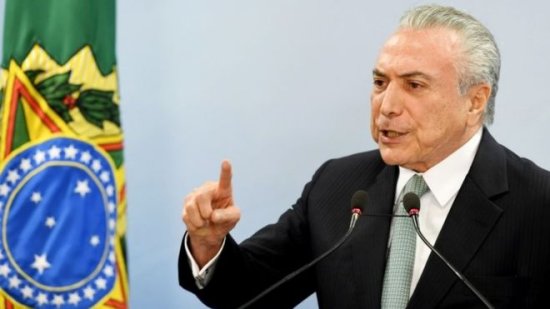 Brazil’s Michel Temer is battling to save his presidency, amid allegations he authorised paying bribes to silence a witness in a huge corruption scandal.

“I will not resign. I know what I have done,” he said in a televised address.

The turmoil caused the Brazilian stock market to have its worst day in over a decade, dropping 9%.

A year ago, Mr Temer took over office, after the impeachment of Dilma Rousseff. Now there are calls for his impeached, too.

Brazilian authorities have released an audio recording where Mr Temer appears to be discussing bribes.

The Supreme Court has approved an investigation into the allegations, but Mr Temer said he would prove his innocence.

What do the recordings say?

The audio came from a conversation between the president and Joesley Batista, the chairman of meat company JBS.

It was originally obtained by O Globo newspaper, having been recorded by Mr Batista using a hidden device.

Much of the conversation is inaudible, but the key line comes when Mr Temer appears to discuss making payments to silence politician Eduardo Cunha, who is currently in jail.

When Mr Batista appears to imply he was paying Cunha to remain silent, the president was recorded saying, “You need to keep that up, okay?”

It does not say what Cunha was being asked to keep quiet about.

Mr Temer has said the footage is authentic, taken from a meeting in March, but he has strongly denied wrongdoing.

In his address, he said, “I never authorised any payments for someone to be silent. I did not buy anyone’s silence. I fear no accusations.”

Mr Temer is already deeply unpopular in Brazil but his centre-right party has been able to govern as part of a coalition.

Opposition parties have been demanding snap elections and his impeachment.

Of more concern to Mr Temer may be signs of dissent within his administration, with a leader of his coalition allies, the social democrat PSDB, saying they were considering leaving the government.

The allegations have rattled Brazilian markets, with investors concerned that if Mr Temer is forced out, his efforts to pull the economy out of recession would be derailed.

The main Sao Paulo share index closed down 9% and the Brazilian currency suffered its worst day in 14 years.