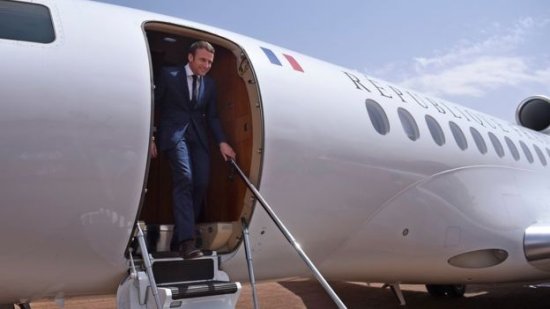 Emmanuel Macron has arrived in Mali to meet French troops, less than a week after his inauguration as president.

He is due to speak with Mali’s President Ibrahim Boubacar Keita during his short visit.

French soldiers have been fighting Islamic militants in the north of the former French colony since 2013.

Mr Macron – accompanied by Defence Minister Sylvie Goulard and her predecessor, now Foreign Minister Jean-Yves Le Drian – will review some of the 4,000 anti-insurgent troops France has deployed in the region.

This is Mr Macron’s second foreign trip as president. He visited German Chancellor Angela Merkel in Berlin a day after his inauguration on Sunday.

As president, he is expected to continue his predecessor’s policy regarding military presence in West Africa. However, the fact French Development Agency (AFD) chief Remy Riouxhas also joined the visit is seen as a sign he wishes to have an emphasis on economic development as well.

France retains a strong influence in its former colonies.

Mr Macron has talked about writing a new page in his country’s relationship on the continent, and of breaking away from the old neo-colonial networks.

As a candidate, he stirred controversy at home by labelling France’s colonial war in Algeria a crime against humanity – something which was well-received in the former colonies.